Herm Edwards, Arizona State Football Are Allegedly In Big Trouble Over Recruiting Violations And It Was Only A Matter Of Time 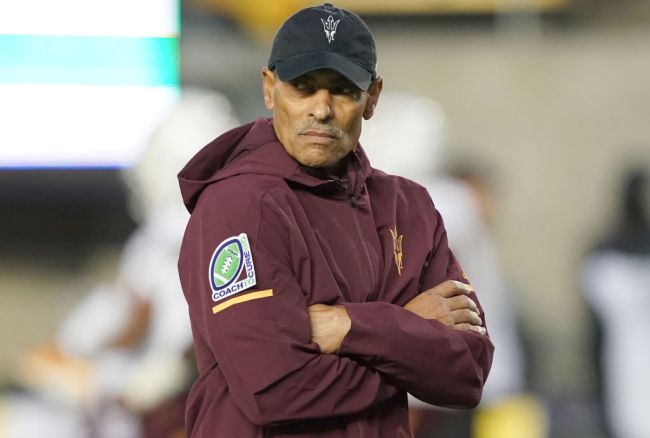 Recruiting violations are rampant in college football and it’s just a matter of which teams get caught. Well, it appears as though Arizona State University is the next school to get popped and it shouldn’t be a huge shock.

Doug Haller and Bruce Feldman of The Athletic reported on Wednesday that the NCAA is investigating potential violations within the Sun Devils program. The investigation reportedly revolves around the decision to host high school prospects on campus during the COVID-19 dead period.

Other reports suggest that the initial inquiry opened up a can of worms, putting the program in serious jeopardy. If the violations are as bad as some are saying, head coach Herm Edwards could be on his way out.

NCAA is investigating Arizona State for allegations related to the football program.

The allegations include paying players, MAJOR recruiting violations, Covid violations, and other things that have left serious concern about the coaching staff being able to coach this season.

Edwards, who coached seven years in the NFL with the Jets and Chiefs, was out of coaching for 10 years. He served as an analyst on ESPN from 2009 to 2017 before making his return to coaching in 2018. The Sun Devils hired the below .500 NFL coach in 2018 and the energy began to change right away.

In his first season, ASU went 7-6 and recorded a ranked win over No. 15 Michigan State. In year two, Edwards’ squad went 8-5 with a Sun Bowl win over Florida State. Last season was marred by significant COVID-19 issues and the school played in only four of eight scheduled games.

A lot of buzz has surrounded Edwards’ start in Tempe. Players are excited to play for him, the culture is on the up-and-up, and people believe the Sun Devils could be a threat in the Pac-12 sooner rather than later.

Perhaps there are behind-the-scenes happenings that make Arizona State even more appealing?

Year four is off to a rough start. Haller and Feldman are reporting that the extent of Edwards’ knowledge is unclear. Either way, it’s not good.

At the base of the allegations is that the football program “hosted high school prospects during the recent COVID-19 dead period.” The recruiting halt began in March 2020 in response to the global pandemic and was only recently lifted on June 1, 2021.

The regulations were put into place to avoid outside contact with prospects and moved recruiting entirely online. Here’s the thing— every school in the country (probably, for legal reasons) violated it.

At least to some extent, recruits spent the last year traveling to universities and visited programs “unofficially.” Look at their instagrams. You don’t really think that those same recruits just so happened to stumble by the football facility, do you?

Arizona State just got caught. And because the Sun Devils are not a “blue blood” like Alabama (who have been rumored to put recruits in brand new cars, among other things), or Clemson (who may or may not have dropped a big bag for Trevor Lawrence), Edwards’ program will be made an example.

Per The Athletic’s report, the school’s athletic compliance office is in the process of interviewing staff members and people on the football staff are concerned about losing their jobs.

For that concern to arise, the violations must be extreme. The COVID-19 dead period is unprecedented, so punishment in that department is unclear. However, in previous cases, breaking the dead period during a standard year does not receive a harsh enough punishment to send the entire staff into a frenzy. It is considered on the “minor” end of things.

Should the violations extend beyond the dead period, things get messy. Probation, bowl bans and a clean sweep of the staff may be in order.

Edwards may be one of the staffers in trouble. If that is the case, his right-hand man is too. Antonio Pierce, who you may remember from his eight-year stint at linebacker in the NFL, is that guy. He is considered a rising star in the collegiate coaching field and is expected to be named head coach at ASU whenever Edwards calls it a career.

Pierce is the associate head coach and defensive coordinator. More importantly in this context, he is the recruiting coordinator. Any violations to occur within the confides of the football program, he likely had knowledge.

Regardless of who knew what, trouble is brewing in Tempe and it doesn’t look good.