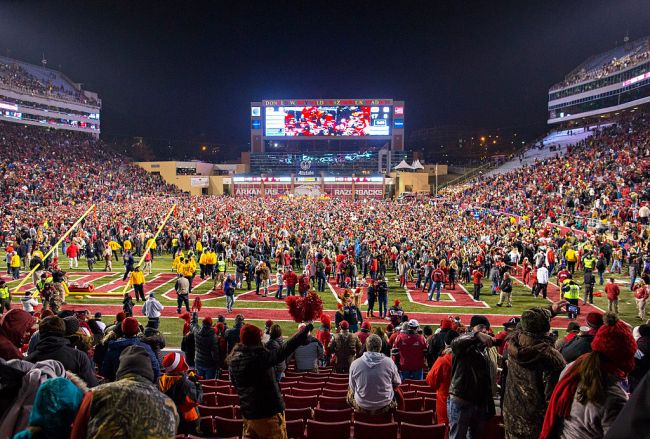 Arkansas welcomed Texas to the SEC (preemptively) in epic, dominating fashion on Saturday night. The Hogs led from start to finish and capped the night by storming the field and putting “Horns Down” across the video boards.

The entire thing, especially the troll job, was what college football is all about. Especially because the Longhorns are not back, just like they aren’t every year since ’05.

Arkansas athletic director Hunter Yurachek was wearing a microphone throughout the entire evening and his reaction to the victory is amazing. Yurachek took over in 2017 and believes he has something building with his hire of head coach Sam Pittman.

Perhaps Saturday night was a testament to that. The school gave a sneak peek at the historic victory from his point of view and everything about it is awesome.

“You and your staff made this happen.”

Here’s a sneak peek of what you’ll see from this week’s episode of The Follow on @hogsplus.

The best part of the video might be at the 45-second mark when Yurachek’s wife Jennifer meets him on the field. Her genuine reaction to the goalposts coming down couldn’t be more perfect.

And then the camera cuts to Hunter wiping away tears of joy. He inherited a basement-dwelling program, suffered through two years of terrible results, hired his guy and beat Texas.

Amidst the touching moment, on the screen pops Jennifer. 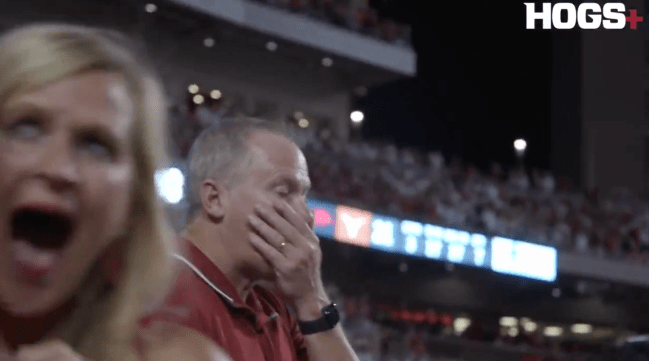 She couldn’t be more thrilled and it couldn’t be a more perfect screenshot to sum up what just happened.

It will be curious to see how Arkansas fares moving forward, but no matter what happens, they are able to throw the Horns Down for at least a few years when Texas moves into the SEC and gets a rematch.