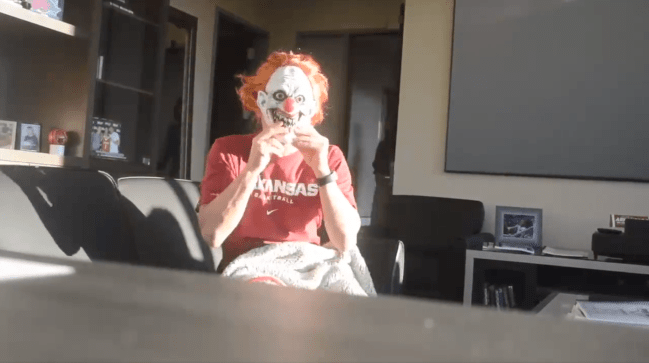 One of the most important skills in basketball is the ability to stay on your toes. Ready position is crucial and Arkansas head basketball coach Eric Musselman is making that a point of emphasis this fall.

However, he is taking a unique approach for both his players and staff.

With Halloween on Sunday, Musselman spent the scaring the living daylights out of anyone who came near him.

Throughout the offseason, the 56-year-old has been posting peaks into the Razorbacks program, sharing a little bit of what a day in the life might look like. In his most recent, Musselman goes on an absolute reign of terror around the team facilities.

First, he jumps out of a closet wearing a clown mask and makes one of his assistants literally jump out of his seat. Then, he comes out of an elevator dressed as a Reese’s Peanut Butter Cup and sends another coach’s papers flying into the air in fear.

The next victim walks around a corner in the offices when Musselman jumps out from a closet.

And then Musselman hides under a blanket in his office and pops up wearing the clown mask when one of his players walks in. The player could not be out of there faster.

To close things out, Musselman must have played the long game. He hid in the closet of one of his assistant coaches offices and waited for the right moment to nearly give him a heart attack.

The entire thing is hilarious and it perfectly showcases Musselman’s energy, enthusiasm, and love for fun. Take a look:

Just trying to keep the office on their toes. 👻 #ThisIsArkansas Episode 8 pic.twitter.com/AHvXS1j46l

How can you not love Muss?!