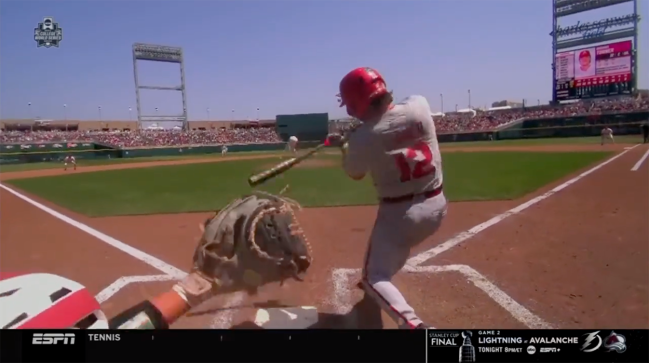 The College World Series is one of the most fun events in sports. Thousands of fans pour into Omaha (particularly those from the SEC) and takeover Charles Schwab Field to watch their schools battle it out in a double-elimination tournament with hopes of reaching the final three-game series for a chance to be crowned the national champion.

But if you can’t make it to Omaha, or your team didn’t make it— no worries. ESPN is making sure that you can enjoy the experience from your couch as if you are there in-person.

Well, they tried, but Arkansas baseball had other plans.

Beyond the crispy 4K shot of Notre Dame’s electric home run celebration that went viral on Friday night, ESPN strapped a POV camera to the head of the umpire. It gives a unique in-the-action look from the ump’s perspective that shows the pitch come in and the batter dial-in to their swings.

The shots that result from the ump cam are really cool, like Stanford’s home run in the first inning:

However, it didn’t last long into Saturday’s game between the Cardinal and the Razorbacks. During the top of the sixth inning, Arkansas slugger Michael Turner fouled off a 2-1 pitch and it went flying off of the bat directly into the ump cam. It completely shattered. Bits and pieces of the camera went flying.

Here’s a look at the pitch that did it, the camera cut out as soon as the ball made contact:

Assuming that ESPN came prepared, it has plenty of ump cams on deck. What are the odds?