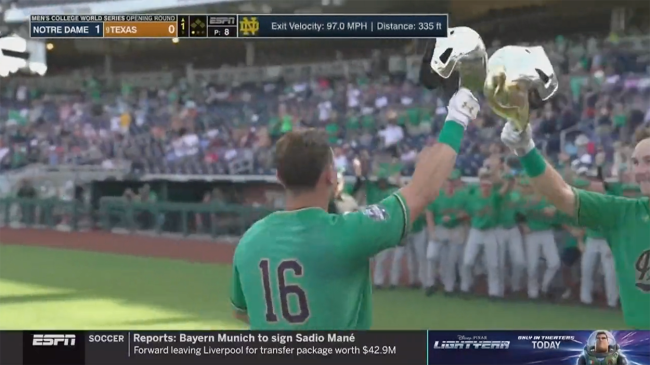 Notre Dame baseball has quickly become America’s team in the College World Series. The Fighting Irish, who came out of the Georgia Southern Regional as a two-seed, ran into a Super Regional matchup with Tennessee, one of the best regular-season teams of all-time.

However, despite the No. 1 ranking next to their name, the Volunteers lost on their home turf in Knoxville and had their season come to a close. Notre Dame, the victors, advanced to the College World Series with the win and proceeded to dance all over Tennessee’s grave at a local Irish pub.

While the vast majority of the country would not typically root for the Golden Domers, they earned the respect of most after taking down the Vols. It was epic.

To turn the tide even further in their favor, Notre Dame met Texas in the first round— another team that is very easy to root against. As a result, the underdogs from South Bend had much of the country behind them. And they did not disappoint.

The Fighting Irish were the only team this season that did not allow an extra base hit to the Longhorns en route to a dominant 7-3 first round win in Omaha.

To get things started, senior infielder Jared Miller went way deep. As he rounded third and headed for home, ESPN quickly switched over to its 4K cam and captured the team celebration in all of its glory.

4K video has quickly become crucial in the sports broadcast world and this is the reason why. It never fails to produce epic shots.