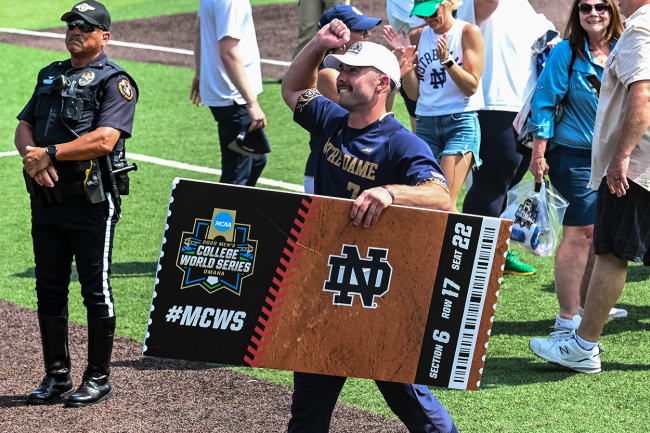 For the entire nation to root for Notre Dame means that the team it is playing must be pretty unlikable. Well, that was exactly the case over the weekend.

Tennessee baseball was practically unbeatable during most of the season. The Vols went 57-9 on the season and obliterated almost everybody in their path. While doing so, they played extremely loud and ruffled a lot of feathers, which is ultimately great for the game.

However, it’s even better when the team that played loud gets upset on their home field like they did on Sunday.

Throughout the year, Tennessee had a cocky home run fur coat celebration, its head coach was often caught in altercation, and its players were not humble in victory. After winning a Regional in walk-off fashion, its star player proceeded to flip off its opponents.

Is Jordan Beck flipping off the outfield as he’s rounding the bases? pic.twitter.com/QSaQVwk3Z7

All of that antics are okay, at least up to the middle finger, so long as that team backs up the talk. The Vols, ultimately, did not.

Tennessee could not overcome Notre Dame in a three-game Super Regional series in Knoxville and had their season end on Sunday. It was a tremendous upset by the Fighting Irish, who are headed to the College World Series with the win.

In this moment, we are all Golden Domers pic.twitter.com/XQ7qAFTHik

Not only were Irish fans pumped that Tennessee lost, as was the rest of the nation.

After the game, Notre Dame baseball danced all over Tennessee’s grave.

The team went on the town to celebrate the win in Knoxville and stopped by an Irish pub, of course. While there, the Golden Domers broke out into a rousing rendition of ‘Rocky Top,’ the Volunteers’ fight song.

The entire thing was absolutely glorious from the win to the celebration. There is surely some boiled-blood in Knoxville after the Notre Dame win, and this video surely didn’t help to cool those folks down. So epic. So vicious.