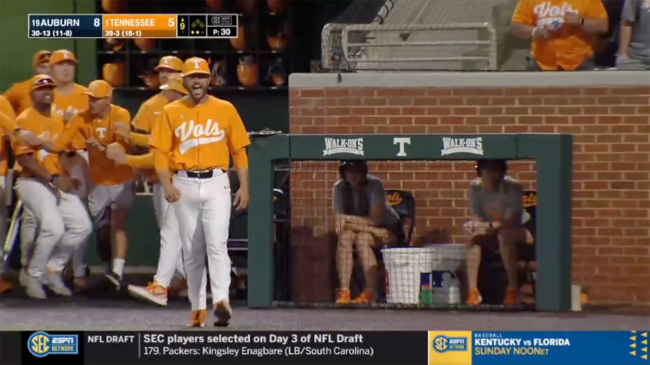 Tennessee baseball lost only its fourth game of the season on Saturday night and it did not come without some shenanigans. Not only have the Volunteers won a lot of games in 2022, but they have played very loud along the way.

To begin the year, Tennessee debuted its ‘home run fur coat’ and ‘daddy’ hat. Although it is a very cocky celebration, it is everything that makes college baseball more fun than the MLB.

In addition, after sweeping Florida on the road last weekend, the Volunteers pissed off the Gators football team by wearing their helmets in the locker room. A week prior, head coach Tony Vitello trolled the NCAA by raising money for charity after being suspended.

This comes after illegal bat allegations have hung over the dinger-mashing program all season.

Everything that Tennessee has done this season has been backed up by their potent, run-scoring offense and lights out pitching. However, if you talk the talk, there is an expectation that it will go both ways.

When another team starts to talk back, you have to be able to take it. Vitello, apparently, cannot.

On Saturday night, No. 1 Tennessee faced No. 19 Auburn in Game 2 of a three-game home series and things got chippy.

In the top of the ninth, Tigers knocked a two-out double to left field that tied the game.

Three-run shot to left for the lead!! pic.twitter.com/uwxWIZykSr

Vitello did not like how the Tigers’ slugger bat-flipped the home run. It took a perfect bounce and went right into Tennessee’s dugout.

In response, Vitello walked out, grabbed the bat and threw it back toward Auburn.

THE BAT HIT A PERFECT BOUNCE RIGHT INTO TENNESSEE DUGOUT.

And then things got heated between the two sides and both head coaches and dugouts spilled out onto the field.

In the end, the visitors got the win and evened the series at 1-1.

Auburn scores 4 in the 9th and takes down Tennessee.

The bad blood is now very real and Sunday’s rubber match is going to be fun.