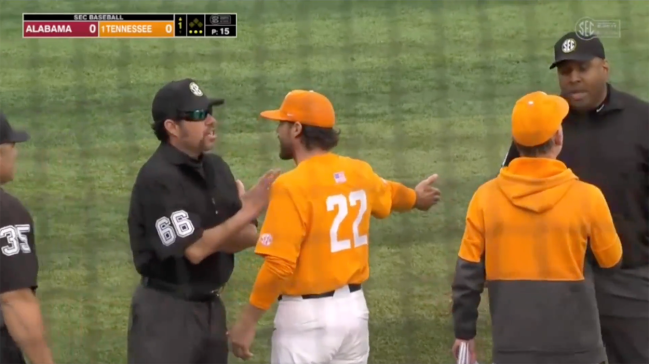 Tennessee baseball has been on an absolute tear this season. The No. 1 school in the nation has lost only three games this year, and although the Volunteers come with some controversy, they hit massive dingers, throw flaming cheddar and win ball games.

At the helm of the program is head coach Tony Vitello, who is quite the firecracker.

He lost his mind on the umpire crew earlier this year after having a home run overturned for use of an unapproved bat. And then, over the weekend, he went nuclear.

A chaotic scene unfolded as Tennessee took on Alabama on Saturday. After the Volunteers’ pitching coach took exception to how the Crimson Tide reacted to an injury, he hopped out of the dugout and let both the opposing dugout and umpires have it.

Immediately after the pitching coach was ejected, Vitello went out to speak his piece. In the process of chewing out the umpires, Vitello chest-bumped the third-base umpire.

Tennessee baseball coach Tony Vitello also got tossed. As a result of the chest bump, he was suspended for four games.

During the suspension, Vitello decided to have fun at the NCAA and umpire’s expense for a great cause. He teamed up with the SAE fraternity on campus to raise money for the Wounded Warriors Project by giving chest bumps to anyone who donated $2 to the charity.

It was a huge success.

Coach Vitello even let me get a chest bump pic.twitter.com/baMvHD8W5m

In addition to the chest bumps, Vitello joined the fraternity for a $1 per throw dunk tank. Both parts of the charity event raised more than $1,000 for The Wounded Warrior Project.