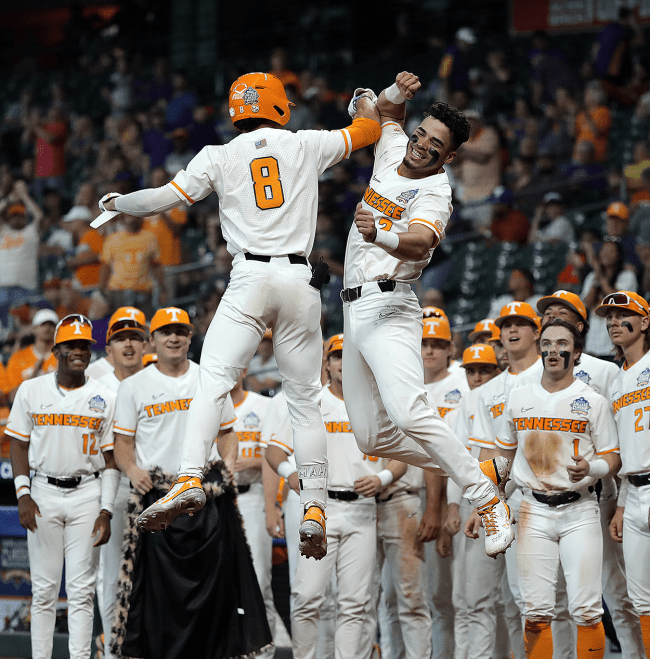 Tennessee is currently the No. 1 ranked college baseball team in the country. However, there are questions about their legitimacy after an ironic sequence of events revolving around illegal bats.

The Volunteers are very, very good. There is no denying that they can mash.

Through 32 games, Tennessee has hit 79 home runs, which is the most in the country by 10. And as a result of the dingers, the Volunteers held the nation’s longest winning streak at 23 games — until Tuesday night.

DOWN GOES #1. TENNESSEE TECH WITH FIRST WIN OVER #1 IN SCHOOL HISTORY.

Carter Gannaway with 5.2 NO HIT innings 9 Ks out of the pen. pic.twitter.com/MtOKyQSdol

While losing to a mid-major school during the midweek is not uncommon, and TTU is very good, the way in which it went down was extremely hilarious. The game was played with wooden bats.

7 of first 8 hitters of the game have K'd pic.twitter.com/Wgrc1ks8gI

While using wood bats might not seem like a big deal, because both sides were using them, the loss comes with a backstory that makes Tennessee look bad.

Throughout the year, as the Volunteers have absolutely destroyed opposing pitchers, there have been rumblings about their typical metal bats. There is some belief, whether true or not, that Tennessee uses illegal, juiced bats, which is leading to their success in terms of home runs.

In fact, while playing against Vanderbilt earlier this month, the Volunteers had a home run overturned for a bat that was not approved prior to the game. The bat was approved for a different game earlier in the week and UT went on to dominate the game anyway, but still.

There is speculation out there, and while the accusations are likely just accusations, it certainly makes the wheels turn. In response to the allegations of juiced bats, Tennessee has been extremely adamant that it doesn’t matter what bats they use, they’re just good.

In fact, outfielder Jordan Beck even said after the home run was overturned against Vandy that it wouldn’t matter if they used wooden bats— they would still hit.

#Vols’ Jordan Beck on those who question team’s power numbers after tonight’s illegal bat ruling: We’ve got a lot of firepower. Give us wood bats. We don’t care. Wouldn’t matter.

And while it is true that the Volunteers can hit and their pitching staff is dirty, they lost just their second game of the year while using wooden bats and scoring just two runs on one of their worst hitting nights of the season. You simply cannot write it any better.