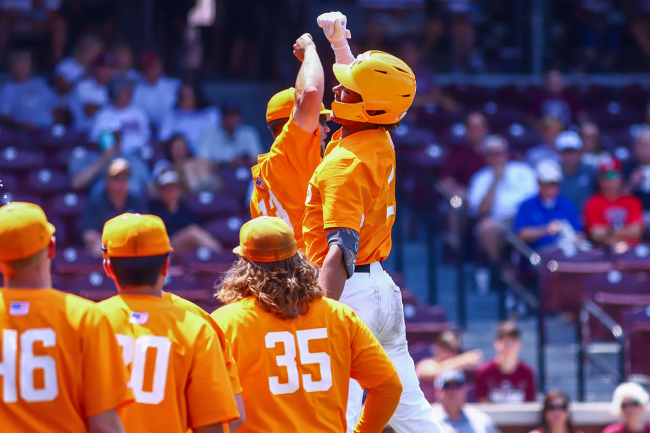 Tennessee baseball was the best team in the country this season and it wasn’t particularly close. The Volunteers won 53 of 60 games and absolutely dominated the vast majority of their opponents.

As a result of its insane season, Tennessee is the No. 1 overall seed in the NCAA Tournament and the Road to Omaha will run through Knoxville. At this point, after they won the SEC regular season title and SEC Tournament title in commanding fashion, it seems like it is the Vols versus the field.

However, there will be a huge target on their back.

Not only does Tennessee boast one of the best lineups in the country with nine batters who rake, but it has arguably the top rotation in the country backed by a strong bullpen equipped with a pitcher who pumps 100+ on a consistent basis. Their historic season, coupled with their cockiness, means that every single team will be out to get them.

Throughout the season, the Vols have played very loud. Their head coach is not afraid of confrontation and received a suspension for chest-bumping an umpire, one of their top relievers rocks an epic mustache, and they talk a lot of smack.

Whenever a Volunteer hitter mashes a dinger, he is met by his teammates at home plate. At that point, they place a large fur coat atop his shoulders and a hat that says ‘daddy’ atop his head. It’s super arrogant in the best way possible and it’s everything that makes college baseball great— even if you don’t like it as a fan of the opposing team, you have to appreciate the fun being had.

Well, as Tennessee gears up to host a regional this weekend, one of its top sluggers is bringing the fur coat with him onto the field. Kind of.

Senior slugger Trey Lipscomb has been a large factor in his team’s success this season. During the postseason, he will be rocking a pair of custom cleats that incorporates the fur coat on his feet.

The third outcome is by far the funniest. Can we all agree to root for chaos?