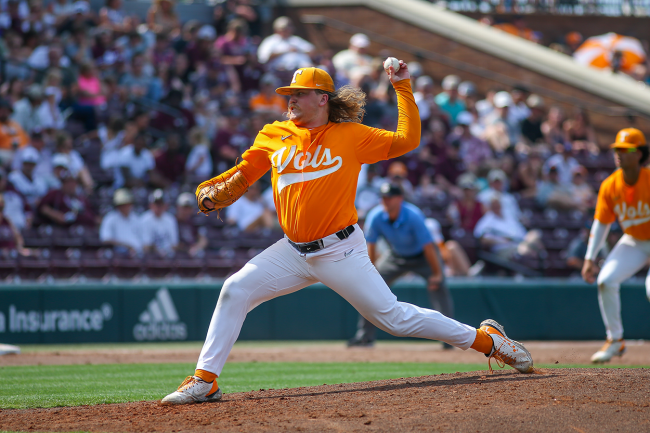 Tennessee baseball is on an absolute tear in 2022. The Volunteers are ripping through their opponents with relative ease as their bats mash dingers and pitchers throw heaters.

Over the course of 57 games, Tennessee has lost only seven times. And along the way, the Volunteers have played very loud and been in the headlines quite often.

Early in the year, they debuted the ‘Home Run Fur Coat’ and ‘Daddy’ hat that is given to any player who hits a home run upon his return to the dugout. Not long thereafter, UT fueled illegal bat allegations by losing one of their seven games with wood bats.

And then head coach Tony Vitello trolled the NCAA by raising money for charity after getting suspended over an altercation with an umpire. The Vols then proceeded to anger Florida football players by putting on their helmets after a series sweep on the diamond.

Meanwhile, their pitchers are throwing the fastest pitches in history and they can’t stop crushing the ball. Tennessee baseball is very, very good.

At the forefront of a lot of the team’s success is relief pitcher Kirby Connell, who has allowed just four earned runs in 32.1 innings pitched with 31 strikeouts. He has been lights out.

Not only is he a dominant reliever, but Kirby Connell rocks the best mustache in college baseball and supplements his handlebar with some serious flow.

[And nasty stuff too.] pic.twitter.com/Sz3aa8PU11

Connell looks exactly how a dominant relief pitcher should look. And after throwing 1.2 scoreless innings against in-state rivals Vanderbilt in the SEC Tournament, he wanted to let everybody know that his ‘stache is king.

Tennessee has a real shot at going all the way if they can continue to stay hot. If that happens, Connell should never shave again.