Baseball World Reacts To No. 1 Tennessee Being Upset By Notre Dame In The Super Regionals 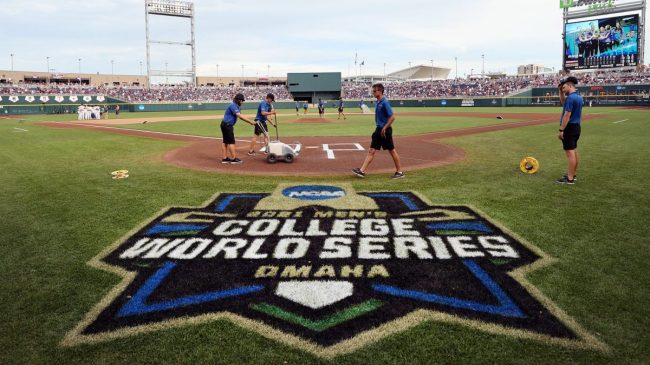 The top ranked Tennessee Volunteers have been upset in the Super Regional by Notre Dame, meaning their hope to reach Omaha has ended. Instead, it’s the Fighting Irish who will head to the College World Series for the first time in 20 years.

The Irish nabbed two games in the three-game set, winning 8-6 on Friday and 7-3 in Sunday’s rubber match. The win gives Notre Dame 40 wins on the year and keeps their season alive for at least two more contests.

For the Vols, their dream season is over. Tennessee has been the No. 1 ranked team in the nation basically all year, posting a 57-9 overall record. The campaign ends a game shy of college baseball glory.

While fans love to see greatness, the Tennessee program has rubbed viewers the wrong way the entire season. The team certainly boasts confidence, but they often take things overboard.

The Vols have been known for their bat flips, arguing with umpires, and flipping off opponents. Unsurprisingly, many fans weren’t sad to see the team eliminated.

Now, we’ll get to watch the underdog get its shot in Omaha. Is there a ‘Rudy-like’ performance waiting for the Irish baseball team?

Fans have bene quick to comment on the upset. Check out the reaction on social media.

Many fans trolled Tennessee because of the way they conducted themselves on the field at times this season.

Others, though, are celebrating Notre Dame.

Welcome back to OMAHA, @NDBaseball!!

The Irish upset the No. 1 overall seed, Tennessee, to advance to the #MCWS! pic.twitter.com/kw6DmsdYOU

Quite a 72-hour stretch for Notre Dame: Land a five-star QB recruit and then go into Knoxville and take down the No. 1 team in baseball at their place, rallying to beat Tennessee to make the College World Series. Wow.

Notre Dame baseball is headed back to the College World Series for the first time in 20 years. Irish knock off No. 1 Tennessee 7-3 in Knoxville to punch their ticket to Omaha. What a job by head coach Link Jarrett.

While you might’ve enjoyed seeing Tennessee lose, what they did this season was remarkable. All eyes were on this game which is huge for the sport.

Like it or not, but what Tennessee did this season was incredible for college baseball

Notre Dame will try to continue their run deep in Omaha. For new, though, they’ll celebrate this monumental upset.