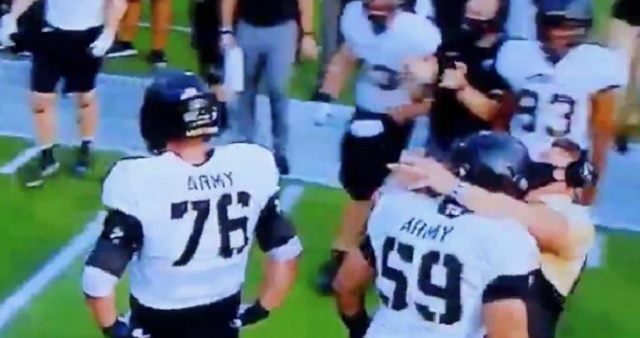 One Army player got a little bit too hyped up on the sideline during the team’s game against Cincinnati.

While coming off the field during a timeout an Army offensive lineman headbutted an assistant coach on the sideline. The coach seemed to get a bit shaken up after impromptu headbutt celebration.

Fans weren’t sure what they had just witnessed.

Did that Army assistant coach just give himself a concussion trying to headbutt a player?

Did anybody else just see that army player head butt the absolute piss out of his coach.. the coach was wobbly 🥴🥴🥴

Can’t call yourself a true football coach if you’re not willing to head it a helmeted player https://t.co/lzCYWJRn1R

The coach was definitely not going for the headbutt there😂 https://t.co/SDkj4ti08O