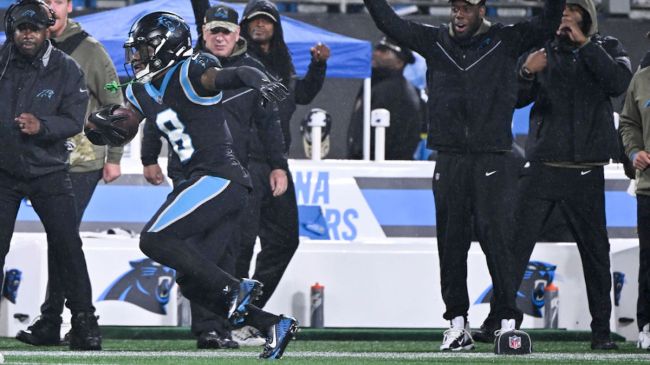 During last week’s Thursday Night Football game between the Atlanta Falcons and Carolina Panthers, Falcons owner Arthur Blank went up to Panthers corner Jaycee Horn to ask if he was related to former wideout Joe Horn. As it turns out, Jaycee is Joe Horn’s son.

Blank — who, despite looking like a supervillain, is one of the NFL’s seemingly nicest owners — approached Horn during pregame warmups and asked if he was related to Joe. When Jaycee revealed that the former Saints and Falcons pass catcher is his father, Blank gushed about the one year that Horn spent in Atlanta.

“He was an unbelievable player and he was responsible for the development of Roddy White. He was a great player but he was a great teacher, too. Nice to meet you, tell him I said hi.”

This is a cool moment here between Arthur Blank and Jaycee Horn: pic.twitter.com/pOIeqrtgyB

Horn was drafted by the Kansas City Chiefs in the fifth round of the 1996 NFL draft. After three seasons with Kansas City, Horn spent the best six years of his career with the New Orleans Saints from 2000 to 2006. During his 11-year NFL career, Horn caught 603 passes for 8,744 yards and 76 touchdowns. His most productive season came in the year 2004 when he caught 94 passes for 1,399 yards and 11 touchdowns.

As for his son Jaycee, he was drafted out of the University of South Carolina with the eighth overall pick in the 2021 NFL Draft. During his NFL career so far, Horn has two interceptions, one of which game in that very game against the Falcons. You can check out his full mic’d up video from last Thursday’s game below: