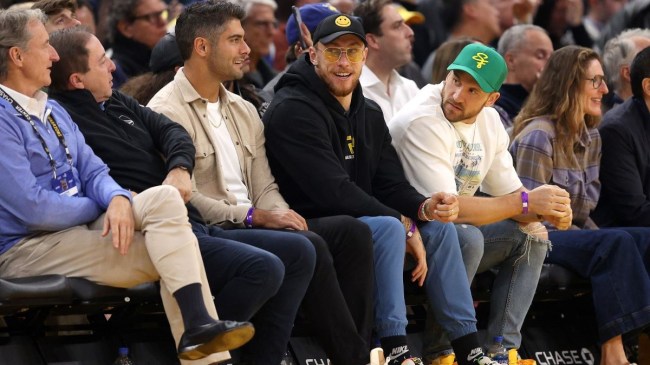 Both the fellas and the lady fellas have to admit, Jimmy Garoppolo is a good-looking dude. I mean, they don’t call the man Jimmy GQ for no reason.

Garoppolo is back to being the starting quarterback of the San Francisco 49ers after a tumultuous offseason that very nearly saw him traded. Ultimately, Garoppolo re-signed with the franchise he once led to a Super Bowl. The new, one-year deal is incentive-laden and was mutually beneficial to both sides. For the Niners, they got an experience, affordable insurance policy for Trey Lance. While Garoppolo got a “show me” deal that would allow him to enter free agency after the 2022 season.

Ultimately, Lance ended up fracturing his right ankle early in the season. The injury will cost him the entirety of the remaining season and puts Garoppolo back in the spotlight.

Garoppolo has looked solid in his seven starts since taking over. He’s led San Francisco to a 4-3 record while completing 66.8 percent of his passes for 1,931 yards, 11 touchdowns and four interceptions. But perhaps more importantly, he’s rehabbed his image. Garoppolo is once again the face, both literally and figuratively, of one of the NFL’s most recognizable franchises, and that comes with perks.

Among those perks is sitting courtside for Golden State Warriors games with teammates George Kittle, Christian McCaffrey and Kyle Juszczyk. But when you do that, you don’t go unnoticed. The Warriors’ dance team certainly took notice of the would-be model quarterback at Monday night’s game against the San Antonio Spurs.

Though they seemed to not pay the same attention to any of Garoppolo’s three teammates. Something Kittle, McCaffrey and Juszczyk immediately gave him a hard time about.

This is absolutely hilarious. You’ve got McCaffrey, Kittle and Kyle J. right next to him and Jimmy G gets all the attention. I guess people don’t easily recognize NFL players without their helmets on except the QB.