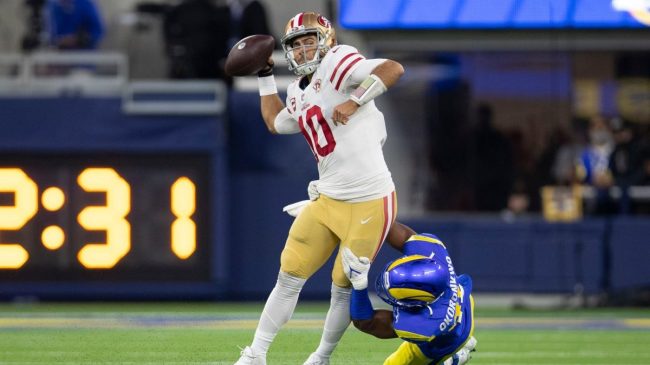 Jimmy Garoppolo’s career in San Francisco seemed as good as over. The former NFC-winning quarterback has been linked to what feels like a dozen NFL teams in the offseason. And for good reason as well.

Niners head coach Kyle Shanahan made his plans clear just last month. The organization planned on moving forward with 2021 first-round pick Trey Lance as the team’s starter. Garoppolo was training on his own and looked totally detached from his teammates. In fact, Jimmy G was listed as the fourth quarterback on the team’s first depth chart of 2022.

You couldn’t blame San Francisco for wanting to move on, either. The highly-paid QB reportedly ghosted the team after signing a massive contract in 2018.

But now that’s all irrelevant.

With no market apparently forming for Garoppolo as a starter, the for Tom Brady backup settled for the next best thing.

Jimmy Garoppolo and the 49ers agreed to a restructured one-year contract that will keep the QB in San Francisco this season, per sources. The contract contains no-trade and no-tag clauses, assuring Garoppolo will remain in SF this season and have the freedom to leave in 2023. pic.twitter.com/2tj0dDGgN9

Garoppolo restructured his massive deal and signed a one-year deal. The deal makes him the highest-paid backup in the NFL. ESPN’s Adam Schefter reports it’s worth $6.5 million in base salary. Garoppolo can earn $500,000 in roster bonuses and nearly $9 million available in playing-time bonuses.

Comp update: Jimmy Garoppolo’s one-year restructured deal is worth $6.5 million in base, fully guaranteed, per sources. He has another total of $500k in roster bonuses. He also has playtime bonuses that can boost it another nearly $9M. So, one year, $7M, up to just shy of $16M.

Perhaps most importantly, it contains both no-trade and no-tag clauses. Those ensure that Garoppolo will hit free agency next summer as a 31-year-old. But for now, one of the NFL’s biggest offseason stories is over.

Fans couldn’t believe that this was the outcome following months of speculations.

Major swing in momentum here. Several teams in recent days were expecting him to be released https://t.co/dqawdEOG7q

This is great for all of us who weren't done speculating about Jimmy's future #FTTB @49ers https://t.co/PNOC1hTAcr pic.twitter.com/5jPsdEXXaT

The only team on planet earth that wants James Garoppolo is the San Francisco 49ers.

Remember the Dane Cook joke about how it takes a long time for couples to break up cuz of weird reasons like “my CD are in his trunk?” The 49ers CDs are in Jimmy G.’s trunk. https://t.co/MXDjVvP94q

Lance was up and down in the preseason, and it’s hard to imagine this will help his confidence. But for Shanahan, it’s a security blanket on a team with Super Bowl aspirations.

What happens next in the Jimmy G saga is yet to be seen.