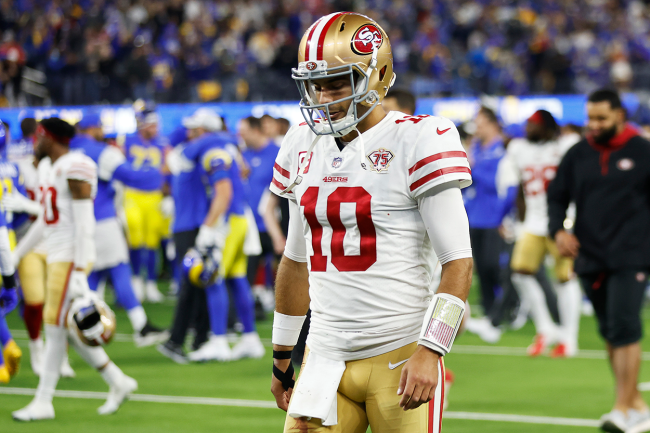 Entering the NFL offseason, San Francisco quarterback Jimmy Garoppolo was considered to be on the trade block. Although the 49ers never explicitly stated anything of the sort, the expectation was that the team would shop around with Trey Lance in the waiting.

And yet, Garoppolo remains in the Bay Area. With all of the movement around the league in recent weeks, the market is reportedly slow, if not dead.

According to San Francisco insider Tim Kawakami, there isn’t much buzz about Garoppolo.

As far as the Jimmy Garoppolo market… shrug emoji right now. Might be time for all sides to do some recalibrating.

Kawakami’s update comes after quite a few teams addressed their quarterback situation throughout this past month. Cleveland traded for Deshaun Watson, Denver traded for Russell Wilson, the Steelers signed Mitch Trubisky and Washington traded for Carson Wentz, among others.

Now, the remaining market is questionable. What teams still need a quarterback? Of those teams, do any of them have interest in Garoppolo?

As of right now, five teams stand out with a pressing question at quarterback.

Perhaps Garoppolo is the answer for either the Saints or Colts at quarterback to step in and start right away. Perhaps the Seahawks, Lions or Panthers want to bring in Garoppolo as a ‘break in case of emergency’ backup— meaning that maybe they will choose to push ahead with their current options and have Garoppolo ready if things don’t go well right away.

Or, after the market settles and the dust clears in coming days, perhaps Garoppolo will not be of interest to anyone and remains in San Francisco. Who is to say?