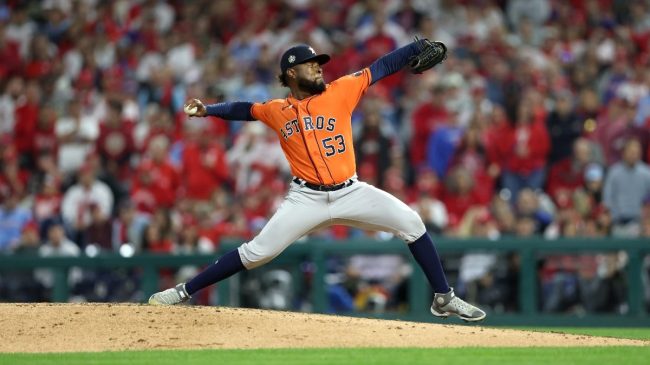 The 2022 World Series has been a tight race so far as the Houston Astros and Philadelphia Phillies are tied up at 2-2. It’s truly gone back and forth as each team goes hot and cold every other game. However, Houston put Philadelphia in the record books on Wednesday night after Cristian Javier and the rest of the pitchers put on a dominant display.

According to ESPN, “the Phillies are the first team in MLB history to hit 5+ home runs in a game then be no-hit in the next one.” The Astros pitchers were playing at another level and they very well could have saved the season for Houston.

The Phillies are the first team in MLB history to hit 5+ HRs in a game and then be no-hit in the next one 😳 pic.twitter.com/QsVdhqsuxa

Additionally, that is just an insane stat. The Phillies looked unstoppable in Game 3 as they teed off the Astros pitchers at will. They turn around and get absolutely smoked at the plate. Cristian Javier and his teammates were slicin’ and dicin’ Philadelphia and etched their names in the history books.

This World Series matchup has been a blast so far. By the looks of it, it has real potential to go to Game 7. However, that all depends on how the next two games play out. Look for the Phillies to get back on track at the plate in Game 5. Meanwhile, the Astros may lean on their pitching rotation throughout the remainder of the series.