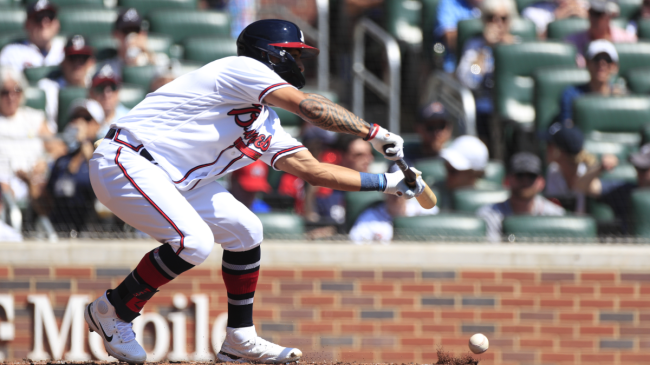 The Atlanta Braves have been one of baseball’s best teams in the 2022 season as they look to follow up last year’s championship run with another World Series appearance. And much like last season, the Braves are led by a potent lineup that boasts tons of power.

In that order you see Austin Riley, Matt Olson, Dansby Swanson, Marcell Ozuna, and William Contreras, each of whom have hit 20 homers or more. In all, Atlanta’s roster has nine hitters with double-digit dingers, and they’ve hit a National League leading 233 home runs through 155 games (1.5 HRs/gm).

Due to that power, and a recent change in the National League strategy, the Braves are on the verge of doing something that’s never been done before.

With just seven games remaining on the schedule, the Atlanta Braves have yet to lay down a sac bunt. That’s never been done over a 162-game season in MLB history. Three teams did do it in 2020 over a 60-game season.

Good morning. Your World Champion Atlanta Braves are eight games away from completing a 162-game season without a sacrifice bunt.

It has never happened in baseball history.

Typically, the sacrifice bunt is used to move runners around the basepaths, getting players one step closer to scoring a run. You’ll often see them laid down with no outs and a runner on first or second. Essentially, the batter will lay down a bunt, purposely giving himself up in order to move the runner that’s on base into a better scoring position.

Sac bunts were extremely common in the National League when pitchers were asked to hit in the order. Usually hitting ninth, pitchers who were often considered an automatic out could at least be productive by moving runners over for the top of the lineup.

The NL recently did away with this rule, though, as now all of the MLB can use a designated hitter. That change in thinking allows coaching staffs to insert another suitable hitter in place of the pitcher.

With that new strategy, combined with the Braves’ long list of sluggers, Atlanta hasn’t been asking its hitters to lay down many bunts. Why give up an out when everyone in the lineup can leave the yard in any given at-bat?