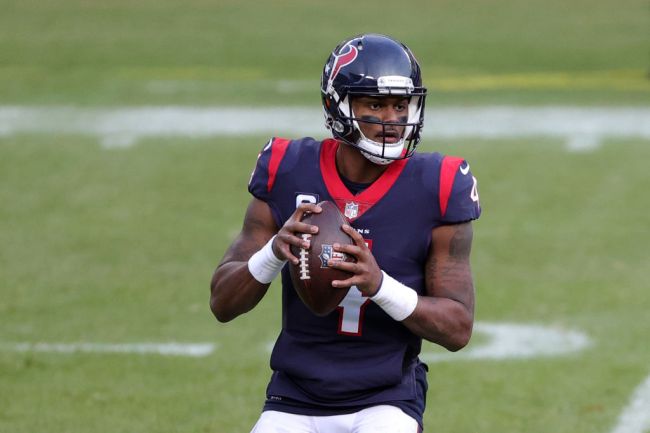 Deshaun Watson’s future with the Texans is likely coming to an end.

The team has been actively shopping the quarterback around the NFL as they look for a potential trading partner. Suitors thus far include the Browns, who are expected to meet with the passer today, as well as the Saints and Panthers.

Both Carolina and New Orleans have reportedly made trade offers for the Pro Bowler, and it seemed that they were the leaders in the clubhouse when it came to landing Watson’s services.

Now, though, a new rival has entered the mix becoming the third NFC South team in the Deshaun Watson sweepstakes.

The Falcons have emerged as a sleeper team to acquire Texans quarterback Deshaun Watson, league sources tell @mortreport and me. The Falcons join the Panthers, Saints and Browns as teams that have met with, or are interested in, trading for Watson. More to come on ESPN.

The Atlanta Falcons are reportedly a sleeper to acquire DW4.

What makes things interesting is the fact that current starting quarterback Matt Ryan recently restructured his contract to create some extra salary cap room for the Falcons to work with in free agency. Now, it looks as though the organization could be turning its back on the veteran in order to add Watson.

Growing up in Georgia, Watson has ties to the team. He was once a ball boy for the Falcons, developing a relationship with owner Arthur Blank.

Falcons owner Arthur Blank is fond of Deshaun Watson from the days when the former Gainesville (Ga) High quarterback worked multiple years as a Falcons’ ball boy and developed a relationship with Blank's family. https://t.co/EypxrnF9ma

Could he spurn his other NFC South suitors and return to Atlanta for a homecoming reunion? The path to landing Watson continues to wind.