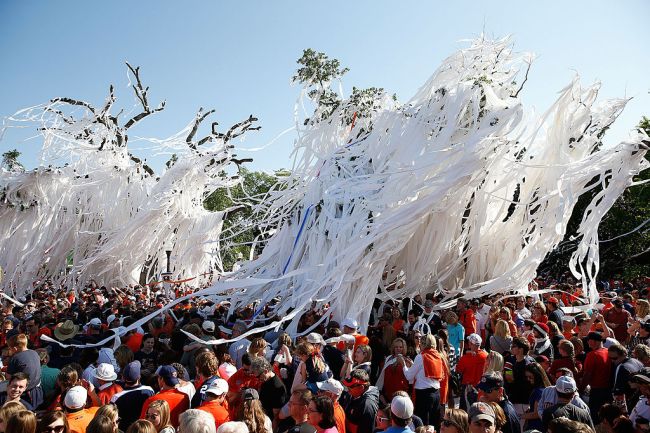 Auburn’s long-standing tradition of rolling Toomer’s Corner after a win is on hold for the 2021 season. Per an official university release, the school is asking fans to wait another year before throwing toilet paper over its famous Auburn Oaks along Samford Park.

The Tigers may not have much going for them, but rolling the trees at Toomer’s corner is one of the coolest things in sports, so this news is a bummer.

For this year, that storied practice is on hiatus.

The original trees that once graced the property were poisoned by Alabama fan Harvey Updyke in 2010. Three years later, after hopes of their survival, the trees were removed.

New trees were planted in 2015, but in 2016, the corner was set on fire and forced them to be replanted once more. It is assumed that the rolling tradition will continue eventually, but Auburn arborists don’t believe that the new trees are quite ready.

They have made excellent progress since 2017, but another year without foot traffic and added stress from the rolling will encourage better growth.

“The trees have made excellent progress in the growing season of 2021,” Auburn arborist Alex Hedgepath (which is the perfect arborist name) said. “Since then, the trees have pushed new growth with no additional signs of stress. We will be initiating soil enhancement projects to encourage even more root growth in the coming months.”

Auburn fans are not being forced to flush the toilet paper tradition entirely. The school has designated two large southern magnolia trees and a white oak in front of Biggin Hall for rolling this season.

With a new coaching staff and a lot of questions surrounding the program, the Tigers may not even have to worry about where to roll all too often this year. Their season win total Over/Under is set at 7.5 and the Under seems to be the expectation from those who aren’t fans.