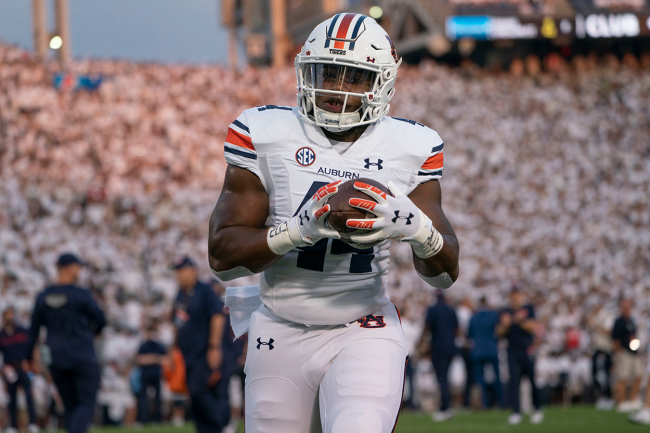 Alabama-native Sean Jackson was an unranked running back recruit out of high school. Now he is a scholarship player at an SEC program.

Jackson, who stands 5-foot-10, 224 pounds, enrolled at Auburn as part of the Class of 2021. He received a scholarship offer from UAB, but chose to join the Tigers as a preferred walk-on instead.

After getting on campus last summer, the freshman appeared in four games last season. he had 10 carries for 38 yards and scored a touchdown in Week 2 against Alabama State.

Although he is not the most sought-after or highly-touted player on the Auburn roster, Jackson has been impressive with his work ethic and shows promise to develop into an important role player out of the backfield. And in the wake of injury and circumstance within the running back room this spring, he has been getting second-team reps during spring practice.

As a result of his hard work and increased touches, Jackson learned that he is being put on scholarship during practice this week. After practice, he got to call his mom on FaceTime to let her know the amazing news.

Auburn posted video of the moment and it will bring you all of the feels.

On the other end of the line, his mom absolutely lost her mind in excitement when Jackson told her the news. Head coach Brian Harsin even came over to let her know how proud that he and his staff are of her son.

Meanwhile, Jackson can be seen trying to hold back his emotions and play it cool.

Congratulations to @Jackboy_33_ for putting in the work and being put on scholarship!#WarEagle | #AuburnMade pic.twitter.com/JVRl91vAz9

Jackson’s mom’s reaction is priceless. She could not be happier for her son, who she has raised and watch develop into the man and player he is today. It is everything that makes college football and college sports great.