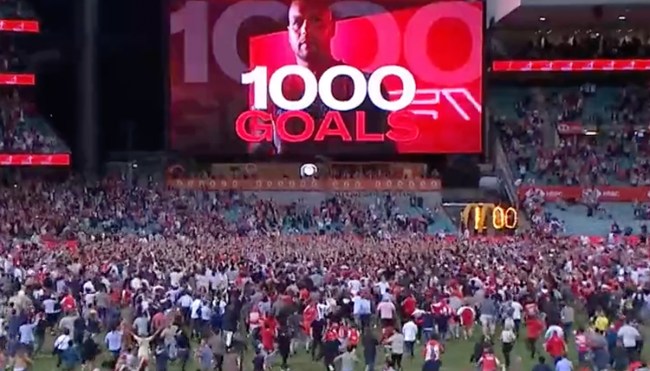 No Sports Fan Bucket List is truly complete until you’re able to check off “Storming the field,” as it’s hard to truly appreciate the feeling that comes with flooding the playing surface to celebrate a particular momentous achievement alongside hundreds of amped-up spectators until you get to do it yourself.

If you haven’t had the opportunity to partake in that type of revelry, you can still get a taste of the unbridled electricity it generates by living vicariously through people who were lucky enough to witness a storm-worthy occasion in person.

The vast majority of videos documenting those deluges comes courtesy of teams who were able to secure a clutch victory or improbable upset on their home turf, but there are also some more unique catalysts—including one that sparked a truly wild scene in the midst of an Australian Rules Football match in Sydney.

With around six minutes to go in Friday’s showdown featuring the Sydney Swans and Geelong Cats, Lance “Buddy” Franklin got the opportunity to kick the 1,000th goal of his AFL career. Franklin capitalized on the opportunity, and after he became the sixth player in the history of the league to reach the milestone, we were treated to some amazing chaos after fans flooded the field to celebrate the moment.

ALL HAIL THE KING!

It took 33 minutes for officials to clear the field before play could resume, and the Swans ensured fans could go home happy for a couple of reasons by capping off the night with a victory.