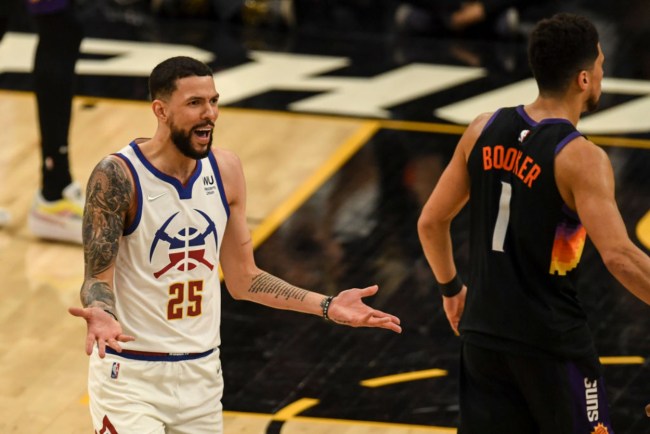 A professional athlete getting upset by someone that doesn’t matter whatsoever saying something harmless about them? No way, we’ve never seen that before.

The latest athlete to whine about a harmless joke is none other than Nuggets guard Austin Rivers.

During the Nuggets win over the Warriors earlier this week, Golden State announcers Bob Fitzgerald and Kelenna Azubuike threw a very soft jab in Rivers’ direction. The two announcers specifically joked about Rivers being overpaid while playing for his father, Doc Rivers, during his time with the Clippers.

“He got a big contract extension when, oh wait, his dad was the coach,” Fitzgerald joked. “Seemed to work out alright.”

Azubuike then followed up by asking, “Are you saying there was some nepotism there?” to which Fitzgerald said, “I’m just saying, if you’re gonna give the money, might as well give it to your kid.”

Rivers, who signed a three-year $35.5 million contract in 2016, didn’t appreciate the joke whatsoever, despite it being completely harmless.

The Denver guard took to Instagram and put the announcers on blast in the comment section underneath the video.

“Think this kinda funny … especially since it’s coming from a guy who has never played a game of basketball in his life,” Rivers wrote…I averaged 11 ppg, 12 ppg, and 16 ppg of the bench for a loaded Clippers team. While being a two-way player … yet he called me overpaid? Do u know how many guys in (the) league made more than me while not doing half as much!?!?”

It’s worth noting that all of this drama came just a week after Rivers had a pair of fans removed from the Nuggets-Thunder game in which he said the fans were “talking about (his) family the whole night.”

Sure, Rivers has every right to jump on social media and blast two announcers that don’t affect his life in the slightest, but him doing so does nothing but fuel all the haters he’s bound to come across in the near future.