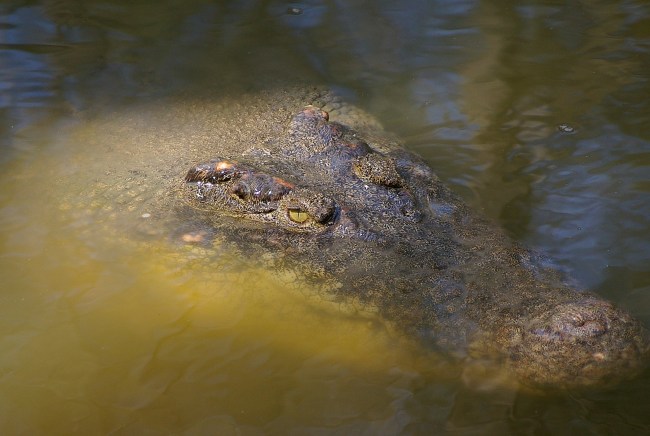 An Australian fisherman must’ve had the surprise of his life when he reeled in a massive crocodile while fishing on the Victoria River in a popular outdoor recreation area three hours west of Katherine, Australia.

The video was uploaded to Facebook by a local family-run bait and tackle shop, Rod & Rifle TackleWorld Katherine. In the clip, you can see the fisherman pull the massive croc up out of the water before the crocodile appears to finally grasp the gravity of the situation and dive below, making a few powerful runs along the way and nearly snapping the fishing rod in half.

This is a popular fishing spot for Barramundi which almost look like a cross between a Snook and a Bass but this Victoria River region is also home to countless crocodiles. Still, you never expect to get the fish to the surface only to find out that you’ve actually hooked a dinosaur. Here’s the clip from FB with a shorter version from YouTube below that:

Props to that fisherman for not just grabbing a knife and cutting the line which is exactly what I would’ve done. Maybe they were hoping that by fighting the crocodile it would eventually spit the hook/lure and swim free which is exactly what happened but if I’m in that boat the last thing I want to do is anger the crocodile any further and risk retaliation. That appeared to be a TINY boat.

Fishing for crocodiles isn’t something I’ve ever heard of anyone setting out to do. This certainly isn’t the first time in history that a fisherman has hooked up with a crocodile. It’s happened more times than anyone will know, but I’ve never heard of crocs as an actual targeted species while fishing. With that said, I’m Floridian and not Australian and for all I know this is a common recreational activity under the cover of night.