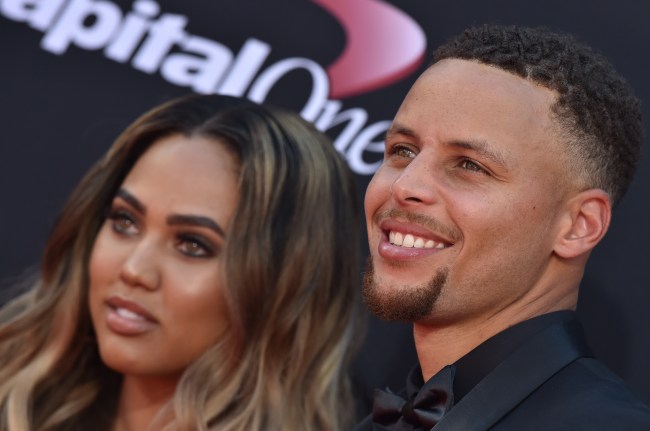 Ayesha Curry is an open book when it comes to talking about her relationship with superstar Golden State Warriors guard Steph Curry. Last month, Ayesha caused a bit of controversy when she admitted that she was jealous of the attention Staph gets from other women.

To our dearest @ayeshacurry we feel you! But damn! having Steph's eyes and heart worths more than millions of man out there. And actually @StephenCurry30 is the winner here for having you. You're beautiful and us women envied you the most. 😂😘❤️ pic.twitter.com/74MpvOdqNx

For the past week, Ayesha has been telling plenty of stories about her relationship while she’s on her media tour to promote her new show “Food Fight” and during one of her interviews she revealed that she sends Steph hundreds of nude photos while he’s on the road to keep things “spicy”.

Ayesha says Steph won’t delete the photos off of his phone but she has a foolproof way to avoid the embarrassment if they do leak. Her advice to women is to take nude photos from the neck down that way it’s tough to prove that it’s them in the photos.

He won’t delete them off his phone and he’s not that secure. It’s actually one of the scariest things in my life. But that’s why, Bella neck down, you gotta prove it’s me

Of course, the Internet had some thoughts about Ayesha once again providing too much information about her relationship to the public.

Now everyone going to be trying to take Steph phone cause they know he has hundreds of nudes of her on there. We didn't need to know that Ayesha.

Ayesha Curry just said in the interview she sends her husband hundreds of nudes and he’s not very careful with his phone. 😂 girl stop nobody is going to hack that phone

Ayesha Curry- Oh I send Steph nudes all the time.