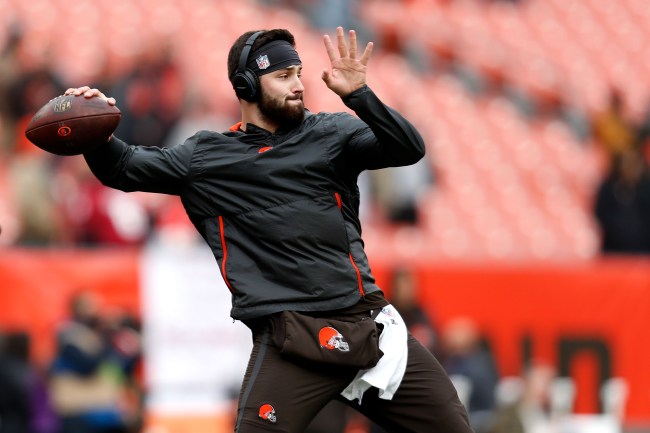 After a stellar offseason everyone and their mother believes the Cleveland Browns have a good chance to make a run at the Super Bowl this coming season.

Fox Sports blowhard Colin Cowherd isn’t sold on the Browns just yet and believes that Odell Beckham isn’t happy being in Cleveland.

"Nobody will be honest about this Cleveland thing. It has a chance to be a complete and utter dumpster fire… Odell didn't want to go here, the owner is a control freak, John Dorsey is a control freak, Freddie Kitchens could be over his head…" — @ColinCowherd pic.twitter.com/Igr7uuhrYn

“This has a chance to be an absolute mess,’’ “Freddie Kitchens? With these egos and these stars. … I can tell you I have this as well-sourced as I can have it on Odell Beckham: he didn’t want to go to Cleveland. He wanted to go to L.A. And I’ve got this sourced. He’s not happy.”

He added, “I keep watching him and I’m like, ‘the guy doesn’t look that happy.’’’

Browns QB Baker Mayfield, who has love-hate relationship with Cowherd, blasted the Fox Sports host on Twitter and called out his “sources”.

Come to Cleveland and ask O if he actually likes it. Just because you say you have a source doesn’t mean you’re not full of BS.
And while you’re at it… come see if I’m a baby… #10ToesDown

Cowherd seemed to be a good sport about Baker calling him out in public.

You’re becoming my fave. This is what young love must feel like. Keep kicking butt. 💪👊🏼.

The Internet had some fun with the Baker-Cowherd beef.

Let’s take a look at what happens when “CowTerd”shows up to Cleveland! 😂 pic.twitter.com/nHukcqaSGo