Fans Thought Baker Mayfield Was A Hologram At His Post-Game Presser, Turned Him Into A Dank Meme 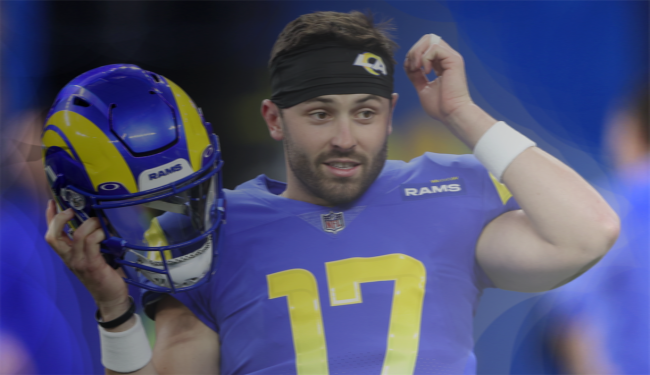 After his very surprising and amazing comeback win over the Las Vegas Raiders, a photo of Baker Mayfield made the rounds on the internet that had many fans thinking he was a hologram.

Since being dumped by both the Cleveland Browns and the Carolina Panthers in the span of just a few months, it would be understandable for football fans to wonder just who that guy was playing quarterback for the Rams Thursday night.

Surely it couldn’t have been Baker Mayfield, could it? He literally had just joined the Rams in the middle of this week.

And yet, after going 0-5 with just 6 passing touchdowns and 6 interceptions with Carolina, Baker Mayfield was out there slinging it and helping the 3-9 Rams get their fourth win of the year in epic fashion.

The guy was, dare we say it, good? Well, if not exactly good, he was definitely entertaining. The dude was even fun to watch after the game when he once again tried to concuss himself by helmetlessly headbutting a teammate who was wearing a helmet.

Not only did Mayfield, just TWO DAYS after being picked up by the Rams, lead them to victory, he eliminated the Raiders from playoff contention in the process.

Even Patrick Mahomes was impressed.

After the game, while speaking to the media, Baker Mayfield answered numerous questions about his journey to the game Thursday night.

However, his appearance at the podium, thanks to some very odd lighting, had many NFL fans wondering if the Baker they just saw go 98 yards on the game-winning drive was a hologram.

is that hologram baker https://t.co/wjLNI6FG0x

“Why is this in the haunted mansion ride?” another fan wondered.

“He’s glowing,” someone else commented.

He’s ascended beyond his mortal form

The best comment, however, goes to @jp_wvsc, who wrote, “This is the most photoshopped unphotoshopped photo imaginable. Was Baker one of the ghosts that Darnold saw?”

This strange image then evolved into some Baker Mayfield hologram memes because, internet.

Seems fitting that Baker would appear as a hologram after the game. pic.twitter.com/xE1aBY5yGc

Whys that podium so big?