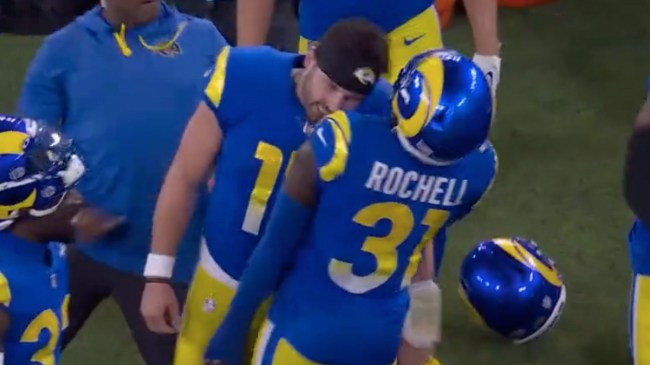 We write about Baker Mayfield quite a lot on this website. And, really, it’s not our fault. It’s actually yours. For whatever reason, the internet seems to get a kick out of dunking on the former Heisman Trophy winner — it was the case when he was in college and it remains so today. And as the old saying goes, if it ain’t broke, don’t fix it.

The truth is, though, that Baker is actually… a quite likable guy. Seemingly endless Progressive commercials aside, of course. That’s why virtually all of social media was rooting for Mayfield last night when he led the Los Angeles Rams — the team that claimed him off waivers on Tuesday before he suited up on Thursday — to a late comeback win against the Las Vegas Raiders.

Following the win — which saw Mayfield complete 22/35 passes for 230 yards and one touchdown — Rams head coach Sean McVay obviously gave the former Browns and Panthers QB one of the game balls and Baker, understandably, nearly blew a gasket while celebrating.

Come for the Victory Speech, stay for @bakermayfield getting a game ball. 🥹💙 pic.twitter.com/tRwmm7ioTk

With Matthew Stafford now 34 years old and seemingly breaking down (physically), Mayfield better pray that Sean McVay decides to coach for another few years because if he does, the Super Bowl-winning coach offers the former #1 overall pick a legitimate shot at rehabilitating his off-track career.

Given his performance against the Raiders after barely two days as a member of the Rams, it’s probably safe to assume that Mayfield will remain the team’s starting signal-caller for the rest of the season (barring injury).

To close out their lacklustre 2022 season, the Los Angeles Rams will face off against the equally disappointing Green Bay Packers, the abysmal Denver Broncos, the Los Angeles Chargers, and the Seattle Seahawks.