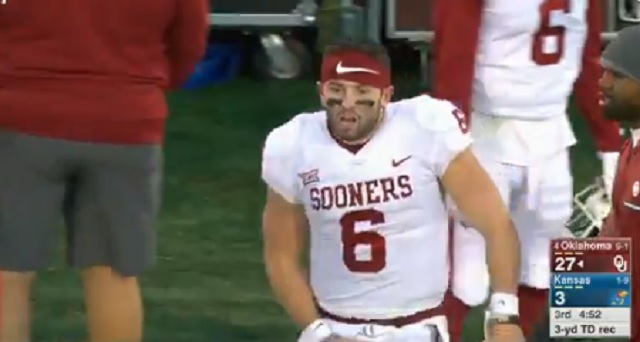 Baker Mayfield is currently on the offensive trying to convince teams that he’s not Johnny Manziel 2.0. Yesterday, the Heisman winning QB took to Twitter to blast a Cleveland Browns writer who questioned why Mayfield was late to the Senior Bowl.

Showing up late? What would you do if your mom had gone to the hospital? Get outta here. Family before myself always.

Mayfield went on to explain that he didn’t being late to Senior Bowl weigh-ins and talked about how he hates the Manziel “bad boy” comparisons.

“I want to show the type of guy I am. Everyone wants to portray (me) as a bad boy, the Johnny Manziel stuff,” Mayfield said. “I love the game of football, there’s no doubt about that. I’m an emotional player. I’ll do anything it takes to win. I love being around my teammates, leading and having responsibilities. It is what it is. If I paid too much attention to it, I’d be focusing on the wrong things.”

There is no question, however, that the circus-like atmosphere that surrounded Manziel throughout his college years tends to follow Mayfield, as well. A throng of media swarmed him following practice, and he was all the more anticipated after a family matter caused a delay in his arrival. Rumors spread that he was trying to avoid his weigh-in — his Oklahoma-listed height of 6-1 is on the short side for scouts — but Mayfield said his mother’s illness was the reason, and he plans to weigh-in like every other player.

“Family first, always, no matter what the situation. I would never put myself above my mom. She’s getting better. She’s got a special appointment Thursday,” he said. “As soon as I found out I booked my flight home. It wasn’t about delaying my measurement. I’ll weigh-in tomorrow if it’s that big of a deal, I don’t care. Family first.”

In the past year Mayfield has done little to squash all the talk about him being a “bad boy” with his antics on and off the field.