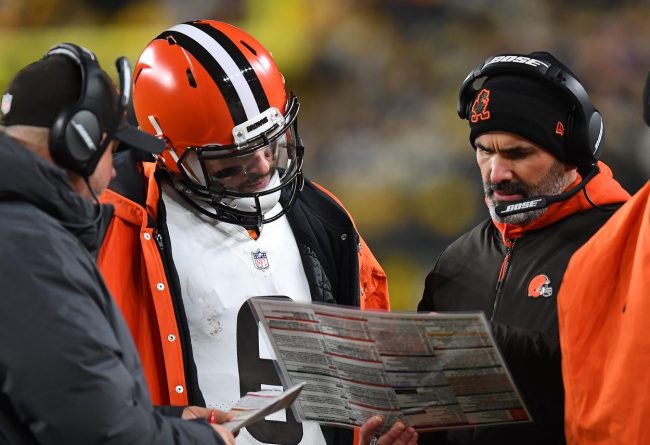 The 2021 season has been not been a cakewalk for Baker Mayfield. Not only did the former No. 1 overall pick played through injuries all fall, but the Browns missed out on the playoffs for the 18th of the last 19 years.

As a result of both the on-field and off-field turmoil throughout the year, the general tone in the media surrounding Mayfield has not been overwhelmingly positive. There has been a lot of hullabaloo about the 26-year-old’s future in Cleveland and he has officially reached his breaking point.

Mayfield’s frustrations boiled over on Thursday over a report from Cleveland.com’s Mary Kay Cabot.

In the article, she said that Mayfield is frustrated with head coach Kevin Stefanski and his play-calling. Per Cabot, things have gotten so bad that Mayfield is considering forcing his way out of the organization by demanding a trade.

Mayfield viciously shot down the report on Thursday.

He took to Twitter and disputed the claims of tension between him and Stefanski and did not hold back. Mayfield called Cabot’s report “clickbait” and said that he will not be the media’s “puppet.”

Clickbait. You and many other Cleveland local media continue to be drama stirring reporters with no sources or facts. Don’t put words in my mouth so you can put food on your table. I’m not your puppet. https://t.co/MfHnqWk65s

Mayfield’s denial could not be more clear. He didn’t say it particularly nicely, he chose to make his point heard. And it is—

Same stuff different year with her. She can’t help herself… https://t.co/sUJvgVx3kN

In addition to Mayfield’s disagreement with Cabot, offensive coordinator Alex Van Pelt had similar things to say. He wants to be clear that there is no tension.

#Browns OC Alex Van Pelt: on if there's tension between Baker Mayfield – Kevin Stefanski: "No. Absolutely not. I know the line of communication is wide open between those two guys. Kevin's always been open, communicative with all the players."

Tension or not, Mayfield isn’t going to let it be a talking point. His business is his business and he likes it that way. Credit to him, he is never afraid to say what is on his mind and you have to admire that.