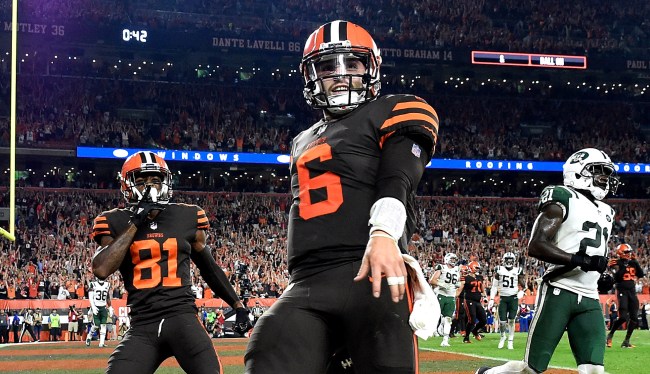 The Cleveland Browns are 6-3 after a gritty 10-3 win over Houston on Sunday. Of the standouts from the defensive back-and-forth chess match, Myles Garrett took his place atop the NFL’s sack leaders list with his ninth and a half sack. He burnt Laremy Tunsil, the best left tackle in the league, around the edge and wrapped up Deshaun Watson to pass Aaron Donald this season.

Later in the drive, with the Texans knocking on the door, Garrett stuffed Watson at the line of scrimmage and kept him out of the end zone.

He has not received as much recognition this season as he may deserve and his quarterback Baker Mayfield took notice. When asked about Garrett’s performance, Mayfield broke out a Lil Wayne quote and said that “real Gs move in silence like lasagna.”

This got me thinking. Lasagna is a great word, and although the g is extremely unnecessary, it makes it just that much better. But where does it stand on the list of words with silent letters? Here is my definitive ranking:

10. PHLEGM. Silent G — “The thick viscous substance secreted by the mucous membranes of the respiratory passages, especially when produced in excessive or abnormal quantities.”

9. KNUCKLE. Silent K — “The rounded prominence formed by the ends of the two adjacent bones at a joint.”

8. BISCUIT. Silent U — “A small quick bread made from dough that has been rolled out and cut or dropped from a spoon.”

6. SILHOUETTE. Silent U — “A likeness cut from dark material and mounted on a light ground or one sketched in outline and solidly colored in.”

5. GNARLY. Silent G — “Very difficult or challenging to deal with.”

4. RASPBERRY. Silent P — “Any of various usually black or red edible berries that are aggregate fruits consisting of numerous small drupes on a fleshy receptacle.”

2. RENDEZVOUS. Silent Z — “A place appointed for assembling or meeting.”

1. PTERODACTYL. Silent P — “A dinosaur of the Late Jurassic and Cretaceous having a rudimentary tail and a beak with reduced dentition.”