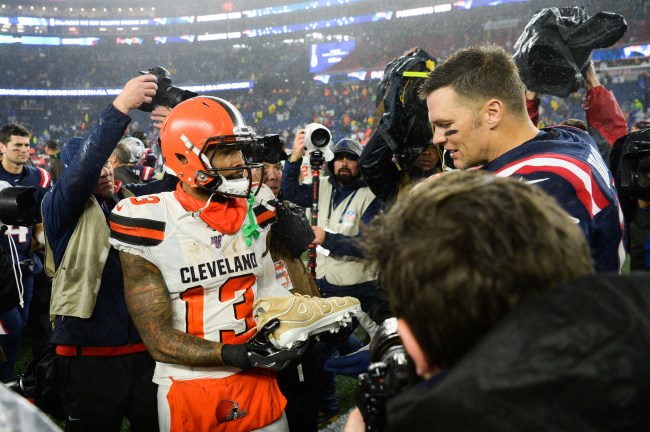 All week long Odell Beckham Jr. has been gushing about Tom Brady and the New England Patriots.

Beckham even revealed that one of his dreams was to play alongside Brady because he respected the QBs work ethic.

“Two, three years ago, there was speculation that was going on. I was willing and ready to go over there at any point in time. That was always a dream of mine to play for Tom Brady.”

“Tom Brady’s the GOAT,” he added. “He’s not human to be playing the way he’s still playing. Mentally prepared every single game. Decisive decisions. Knows how to manage a game. Plays offense and defense with the way that he plays…He’s just the greatest. I definitely want some of the water that he’s drinking.”

After the Patriots beat down the Browns today, Beckham presented Brady with a pair of custom “GOAT” hair Nike cleats

Baker could be seen lurking in the background as Odell gave Brady the cleats and he looked salty as hell.

Baker looking like he wants to knock them shoes out of Odell’s hands. 🤣🤣🤣🤣🤣🤣 pic.twitter.com/bSk7ttxuOq

Zoom in on Bakers face pic.twitter.com/IZQR6FV7Ds

I wish Odell liked me too. pic.twitter.com/gyiOX755Lx

This pic…lmao. Odell wants to play with Brady SOOOOO bad. And baker is definitely the jealous ex gf in the back https://t.co/Gdzrnp7eSN