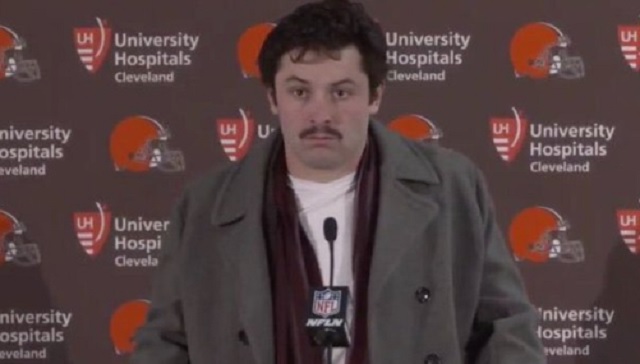 The Cleveland Browns are going through rough times and Baker Mayfield seems to be aging at rapid speed.

Today, the Cleveland Browns lost to the Joe Flacco-less Denver Broncos and Baker is getting the brunt of the blame for the team’s woes.

After the game, Mayfield’s postgame outfit looked quite depressing.

Of course the Internet had jokes over Baker’s outfit.

Baker Mayfield looks like Johnny Manziel trying to sneak back into the league with a fake mustache and wig pic.twitter.com/NcN7UVPwSO

Why Baker dressed like he bout to rob Macaulay Culkin’s house pic.twitter.com/pMqlm07i0n

Baker Mayfield looking like every drunk detective in every crime film ever made. https://t.co/oELOqx9Gh4

Baker Mayfield is selling shower curtain rings while trying to get back to Cleveland before Thanksgiving. pic.twitter.com/QSZ47L4jzE

Things are going so bad for the Browns they got Baker Mayfield dressing in the lost and found clothes in the stadium. pic.twitter.com/qGHp6TAIK6

Baker Mayfield has entered the career phase in which he looks like a hardscrabble detective with a drinking problem and alimony to pay. pic.twitter.com/SNP5ptKNqK

Prometheus Trio: For the third program of its 2008-2009 season, the Wisconsin Conservatory of Music’s resi.. http://tinyurl.com/ag5vd9