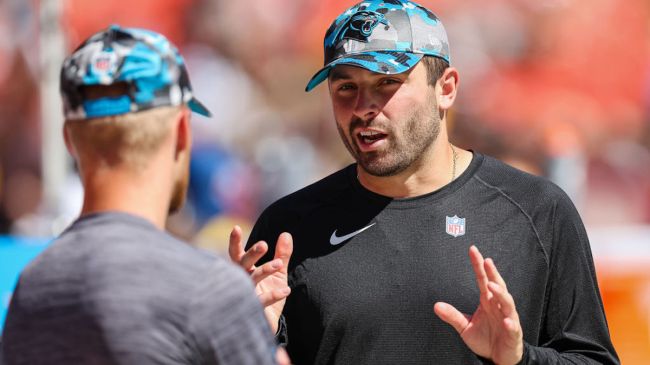 After being selected by the Cleveland Browns with the #1 overall pick in the 2018 NFL Draft, former Heisman Trophy winner Baker Mayfield now finds himself as the quarterback of the Panthers following a trade to Carolina.

Following a disappointing 2022 season that saw both Mayfield and the Browns regress, the organization — clearly in win-now mode — decided to acquire controversial quarterback Deshaun Watson from the Houston Texans. And due to the acquisition of Watson, the Browns shipped Mayfield out of town for just a 2024 conditional draft pick.

After landing in Carolina, it didn’t take Mayfield long to win the starting quarterback job over fellow first-round bust Sam Darnold, and as a result, he’s earned the chance to face off against his former employers as the Panthers take on the Browns on Sunday.

Speaking to reporters earlier this week, Mayfield addressed the narrative that this is a “revenge game” for him and claimed that he’s “grateful for the time” he had in Cleveland.

“It’s a great storyline. Obviously, there’s history leading up to this week. [But] there’s other games in the NFL that guys are playing (against) their former team. It’s just the excitement of leading up to Week 1 that is building that anticipation up. It’s the familiarity,” Mayfield told reporters on Wednesday.

“Any time you’re playing guys you know, it makes it just more interesting, more fun. You get to smack talk with your buddies that you’ve been with for a little bit. You know how to poke and prod and get the best out of them. I’m looking forward to the opportunity.”

“I’m grateful for the time I had in Cleveland. I started my career there. The fans there, it’s a football town. As I mentioned multiple times it ended abruptly and unexpectedly, but we’re here now. Everything happens for a reason. I’m rolling with the punches. I’m happy to be a Panther,” Mayfield concluded.

Mayfield and the Panthers are slight favorites in the matchup against the Browns, as they’re currently favored by about 1.5 points.