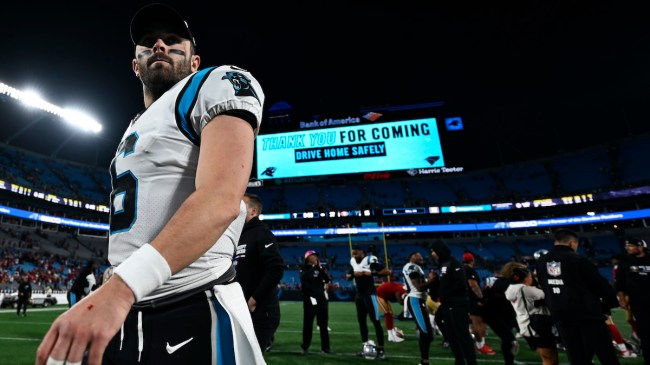 After being released by the Carolina Panthers — who only acquired him back in July — Baker Mayfield finds himself on the open market just four years into his NFL career, which marks a shocking fall from grace for the former Heisman Trophy winner.

What makes Mayfield’s career downturn so shocking is that the 27-year-old signal-caller *has* shown the ability to perform in the NFL. Not only did he complete 63% of his passes for 3,563 yards, 26 touchdowns, and eight interceptions during the 2020 season (efficient albeit unremarkable numbers), but he helped lead the Cleveland Browns to their first victory since 1994. That should count for something.

Still, the wheels came off shortly thereafter as his performance the following season convinced the Browns — who somewhat foolishly believe they’re in win-now mode — to swap him out for controversial quarterback Deshaun Watson (he of the 26 civil lawsuits alleging sexual misconduct and/or assault). After trading for Watson, the Browns shipped Mayfield to the Panthers, barely four years after taking him #1 overall, for just a fifth-round pick.

Fast forward to today, just five months after Mayfield hopped on a flight from Cleveland to Charlotte, and the Panthers have shockingly released him, essentially admitting that their Mayfield experiment failed not even half a year into the project. Now, Mayfield heads to waivers before likely ending up as a free agent, when he’ll be able to sign with any team that wants him. If any team wants him.

And that, ultimately, gives Baker the unfortunate distinction of being one of the biggest draft busts in recent memory — at least as far as #1 overall picks are concerned — as finding himself on the open market just four years into his career is on par with the likes of JaMarcus Russell, the infamous Raiders QB that lasted just two years in the league.

In fact, every single #1 overall draft pick since 2008 has stayed with the team that drafted him for at least five seasons. Mayfield, however, was with the Browns for just four and now already finds himself as a potential free agent. 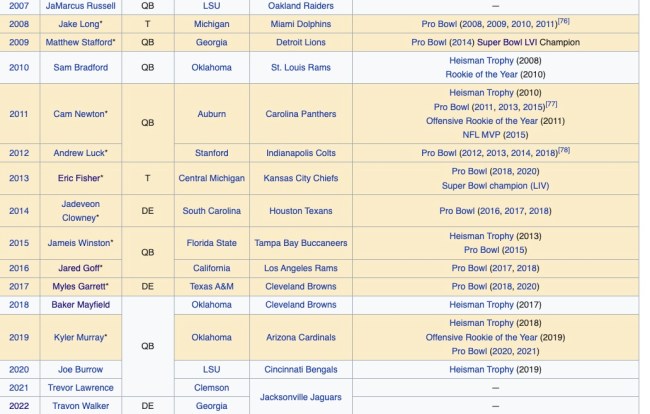 Luckily for Mayfield, though, it appears as though Kyler Murray — also an undersized former Heisman Trophy-winning Oklahoma Sooner — seems to be on a similar career path, so maybe he won’t be the unfortunate owner of this title for long.

RELATED: Emily Mayfield Seemingly Reacts To Her Husband Baker Being Released By The Panthers