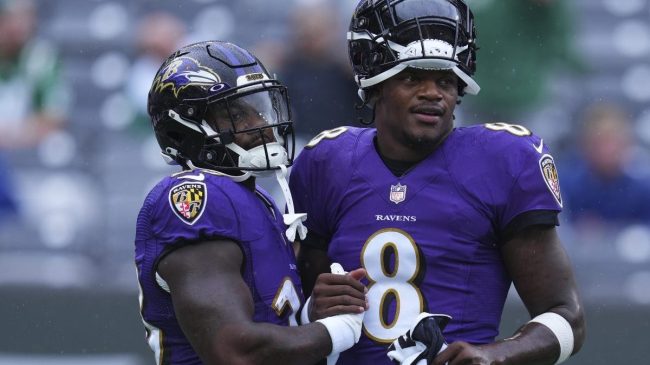 Baltimore Ravens superstar QB Lamar Jackson was right at the center of attention during the NFL offseason. The 2018 NFL MVP was seeking a massive contract extension from the team, with rumors he wanted the deal to be $250 million fully guaranteed.

The Ravens didn’t offer that deal. Instead, they reportedly offered Jackson a $290 million deal, though with just $133 million guaranteed. Reports state Jackson declined that offer.

Instead, Baltimore announced that its start quarterback would play out the final year of his rookie deal. That means Jackson could theoretically leave in free agency following the season.

If the effects of contract talks weighed on Jackson in week one against the New York Jets, it was hard to see. The league’s most dynamic quarterback threw for 213 yards and three touchdowns in a convincing 24-9 win in the Meadowlands.

How did he celebrate the victory? By going to school the very next day.

If attending school doesn’t sound like the most fun way to celebrate a win, we don’t blame you. Jackson could’ve had a nice party, maybe order his favorite food.

But instead, he opted to volunteer.

The Ravens’ signal-caller spent Monday morning at a local Baltimore elementary school reading his children’s book, I Dream, You Dream, Let Us Dream!, to young students.

.@Lj_era8 brought his children’s book to read to elementary students on this Victory Monday 💜 pic.twitter.com/79lNhIEBLW

“It pretty much is talking about dreaming,” Jackson said. “Me wanting to be an NFL player, I’ve dreamed about that since I was a little kid, and my dreams came to reality. I know there are probably teachers that wanted to be teachers [and] stuff like that. They dreamed about it, and they ended up being teachers or professors. That’s pretty much what the book is about – just dreaming for the little kids,” Jackson said of the book.

The students also had time to ask Jackson some important questions.

It turns out Jackson isn’t just an NFL MVP, but also a pillar of the Baltimore community.