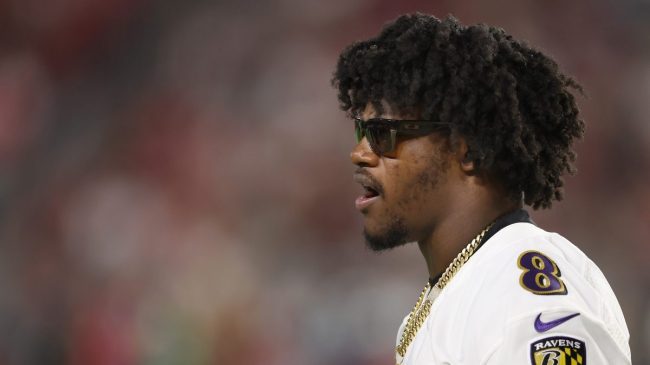 The clock is officially ticking on Lamar Jackson’s time as a Baltimore Ravens player. The 2019 NFL MVP is in the final season of his rookie contract and has yet to come to terms with the team over a new long-term deal.

Jackson looked on as fellow stars Deshaun Watson, Kyler Murray, and Russell Wilson each received massive new extensions. But reports say Jackson, who is being represented in talks by his mother, is holding out for a larger deal than all three. Beyond that, Jackson reportedly wants his deal to be fully guaranteed, something the Ravens have yet offer.

Jackson has long maintained that he didn’t want contract discussions to carry on into the 2022 season. Earlier this week, he set Friday as a firm deadline to get a deal done.

That day is now here, and with no deal done the Ravens made a big announcement.

With no contract complete and the Ravens’ season set to begin on Sunday, it appears that Jackson could be headed for free agency in 2023.

The team released the following statement on the situation on Friday morning:

“Despite best efforts on both sides, we were unable to reach a contract extension with Lamar Jackson.

“We greatly appreciate how he has handled this process and we are excited about our team with Lamar leading the way. We will continue to work toward a long-term contract after the season, but for now we are looking forward to a successful 2022 campaign.”

Baltimore could technically place the franchise tag on Jackson in both 2023 and 2024. Though it’s unlikely they’d want to anger their franchise quarterbacks.

Jackson has been forthright throughout the process about his demands and the Ravens likely meet those demands eventually. For now, though, the rest of the NFL must be licking its chops.