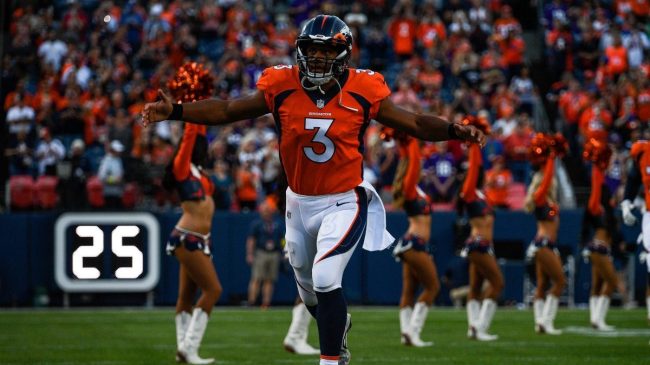 Broncos country, are you ready to ride?

Russell Wilson was the star of the show for the Denver Broncos this offseason. The nine-time Pro Bowler and Super Bowl 48 champion came to Denver following a massive trade back in March. In exchange, Denver then sent quarterback Drew Lock, tight end Noah Fant, defensive tackle Shelby Harris and whole slew of draft picks back to the Seattle Seahawks.

Now the Broncos are making sure they lock down their investment long-term.

Denver sent waves through the NFL on Thursday morning with news that it had signed Wilson to a massive long-term extension.

NFL Network’s Ian Rapport was the first to break the news.

Sources: The #Broncos and QB Russell Wilson agree to terms on a 5-year, $245M massive extension. He gets $165M guaranteed. Officially locked in.

The contract checks in at five years and $245 million, with $165 million of that guaranteed to the 31-year-old signal caller. The deal checks in at $49 million annually and makes Wilson the second-highest paid player in the league behind Green Bay Packers QB Aaron Rodgers. Russell is also set to make just more than Arizona Cardinals quarterback Kyler Murray, who signed a gargantuan deal of his own this offseason.

Broncos fans are ecstatic following word of that they’d locked down their superstar.

While many across the league could only think about what the deal means for Lamar Jackson and the Baltimore Ravens.

Wilson and the Broncos have a tough task ahead in the loaded AFC West. But they’ll begin the season in prime time against a familiar foe. Denver travels to Seattle on Sept. 12 to face off with the Seahawks. While it’s sure to be an emotional return for Wilson, his many, many millions of dollars should be of some comfort.