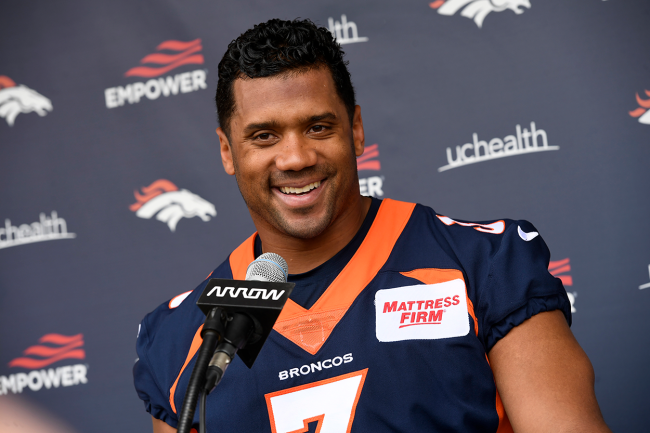 The Denver Broncos are gearing up for the 2022 NFL season both on and off of the field. To prepare for the latter, the team brought its players behind-the-scenes on Thursday to get all of its media prepared.

Whether it be for social, or for in-game video, or commercials, the team collects a lot of content prior to the season. They use it for various gifs, to get fans hyped on third downs, etc.

For some reason, the social team decided to share a back-end look at the process. They showed their athletes going through the filming process in front of a green screen, and showed all of the takes.

Russell Wilson’s video was extremely cringeworthy. He just continues to look at the camera and say “Broncos country, let’s ride!”

Although it isn’t awkward in context, because Wilson is just doing what is asked of him and it happens with every team prior to every season, the decision to post all of the takes was odd. It gave free range for the internet to react accordingly and that’s exactly what happened.

The Denver Broncos set Wilson up to get roasted and Wilson got roasted.

Let's be honest though, Broncos Twitter page is doing him no favors here though. It's like they are trying to get people to make fun of him, it's a odd video to post..

Maybe just put out the final cut next time

Why tweet this to make your 🌽🌽 QB sound 1000 times more cringe? Just release the official video with green screen.

“Again Russ, until we get it right” pic.twitter.com/fvHEwQKFXH

Why post this? It feels much more genuine when you play it in a commercial or to pump the crowd up. This just feels like an ad when you show all the different ways he can say, “let’s ride”

Among those who chimed in on the video was Broncos running back Melvin Gordon. He had a good laugh.

However, when he got questioned about the video, he made it clear that people need to back off of his quarterback.

In the end, the Denver social team set Wilson up to fail. Brutal.