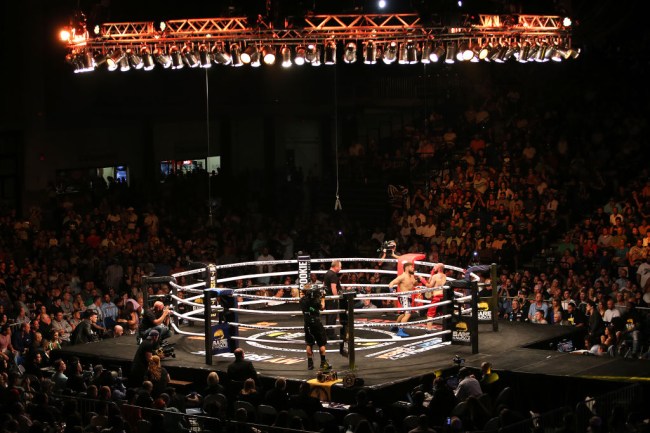 There are no gloves to pad the vicious blows in bare knuckle fighting, one fighter learned the hard way as he was on the receiving end of a devastating punch. The smash was so powerful that the fighter was instantly put to sleep and he ended up face-planting into the canvas.

In case you missed it, Bare Knuckle Championship 7 took place on Saturday night in Biloxi, Mississippi. The highlight of the night and maybe even the year was Kaleb Harris brutally knocking out Johnavan Visante that was so intense you can almost feel the pain through the screen.

Harris dominated the first round and then it was game over 51 seconds into the second round. Harris unleashed a savage right hook on Visante. The shockingly violent punch put Visante to sleep and he plummeted face-first to the canvas. The ref called the fight after the nasty KO and the medical team was on the scene to revive Visante.

Bare Knuckle FC called it the “KO of the Night.”

Your “KO of the Night” comes courtesy of Kaleb Harris with a devastating right that put Vistante out on his feet!#BKFC7 | HARRIS vs VISTANTE pic.twitter.com/uletXnhro6

Thankfully, Vistante, who is from Hawaii, survived the booming knockout, but his future in bare knuckle fighting sounds murky.

“It was a good run. Had my first professional fight at 16. I loved every minute of it. It’s took me too long to realise that the dream of my children and family are more important than mine alone,” Visante wrote on Twitter.

It was a good run. Had my first professional fight at 16. I loved every minute of it. It’s took me too long to realize that the dream of my children and family are more important than mine alone. It’s been real guys. I love every single one of y’all who have supported me. Thank u

I gonna take the week off…just pay attention to absolutely nothing. I’m gonna pig out all week. I’m gonna get lit. Fuck it. I’m doing whatever I want. Come Monday morning we back on the grind. Might not be for the same reason but we grinding either way.

The 25-year-old Harris evens up his record to 1-1 in bare knuckle fighting. Here is the post-fight interview with Mississippi’s own Kaleb Harris. “I’m on cloud nine right now. This is the twentieth fight of my career and I told a few of my close friends I was ending it in the second round,” Harris said.