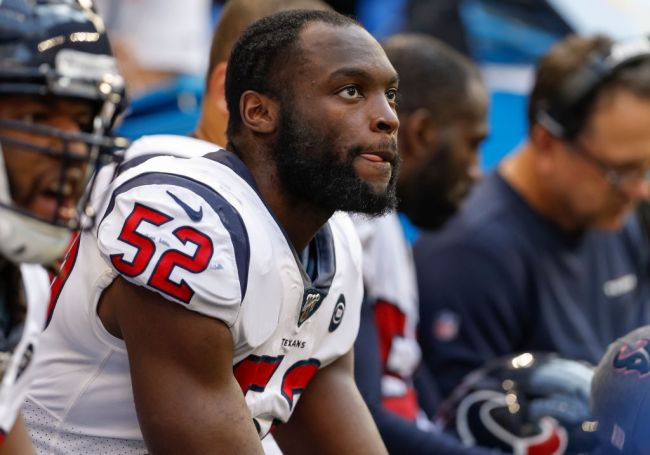 According to a report from ESPN, Mingo was arrested and charged with indecency with a child after getting accused of having sexual contact with someone under the age of 17.

Atlanta Falcons' LB Barkevious Mingo was arrested on a charge of indecency with a child:https://t.co/UT2aMnNcwN

Atlanta Falcons linebacker Barkevious Mingo was arrested in Texas this week on a charge of indecency with a child, sexual contact, according to Arlington Police Department records.

Mingo was arrested Thursday on the second-degree felony charge, which carries a maximum penalty of 20 years in prison under Texas state law. According to the state penal code, the charge relates to engaging in sexual contact with someone younger than 17 years of age or causing the child to engage in sexual contact.

No other case details were immediately available.

As Mingo faces 20 years in prison, his lawyer came forward to say his client is not only inoccent but the accusations are completely “baseless” that are “motivated by money.’

A statement from the Lukas Garcia, attorney for #Falcons LB Barkevious Mingo, who was recently charged with indecency with a child. Garcia calls the charge “completely baseless: pic.twitter.com/OksG4Xe414

“The allegations out of Tarrant County against my client are completely baseless,”“Barkevious Mingo is innocent. At this stage, our side has very limited information. What we do know is these allegations are from over two years ago and are completely untrue. Mr. Mingo is the victim of a false claim, and we believe this is motivated by money or some other ulterior motive. We are confident when the truth comes to light, my client will be fully exonerated.”