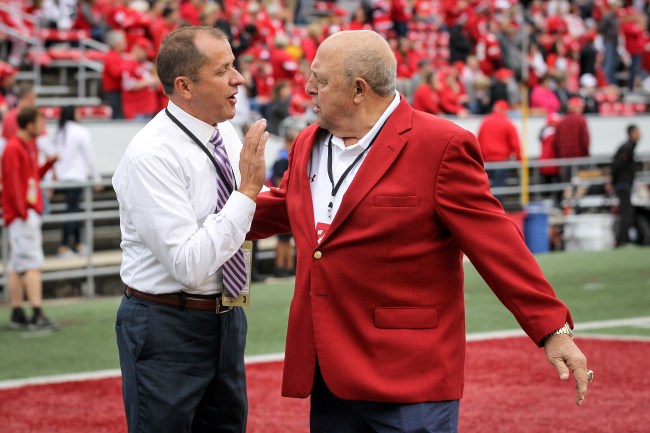 Barry Alvarez is an absolute legend in the state of Wisconsin, as the former Badgers head football coach and school’s current Athletic Director elevated the program to new heights during his time on the sidelines. Coaching the team from 1990-2005, then filling in again in 2012 and 2014, he won 118 career games at the university, so Alvarez knows a thing or two about what it takes to be a winner — which is why he’s one of the top college football coaches of all-time.

With three Rose Bowl victories to his credit, Barry Alvarez understands what the “Granddaddy of Them All” means, and, seemingly, will never lose the intensity of the game when in the stadium. And, while Alvarez has moved from wearing a headset on the field to watching the games from a press box now, it’s clear he has one focus — watching his Badgers on the gridiron without distraction.

Need a little proof of just how focused Barry Alvarez is during the Rose Bowl? Look no further than what TV cameras caught yesterday during the Wisconsin-Oregon Rose Bowl Game, which caught the 73-year-old literally shooing away his young grandson so that he could watch the game.

Favorite play from the #RoseBowlGame so far…
Wisconsin AD Barry Alvarez shoos away his grandson…moments later Grandma has moved the kid away from Grandpa😂😂😂😂 #RoseBowl #GoDucks #Badgers pic.twitter.com/8rlO1Ke5bp

While that’s funny — and a bit of a Scrooge move by Alvarez — it became next level when TV cameras peeked in on Barry Alvarez next, which showed the Athletic Director sitting solo with his arms crossed, with the young grandson nowhere to be found.

Barry Alvarez treated his young grandson like a drunk fan yesterday at the Rose Bowl, legit removing the kid from sitting next to him. 😂 pic.twitter.com/p8qm50d1xX

As you might imagine, once people on Twitter saw Barry Alvarez’s reaction to his grandson simply trying to talk to him, they couldn’t help but chime in with some commentary. Take a look below.

For anyone surprised to see Barry Alvarez act like an asshole on live TV, a reminder that he raised a kid who thought it’d be hilarious to microwave a live parrot. But dang he sure could coach couldn’t he

At least Barry Alvarez has his priories in order. pic.twitter.com/uIVh4O7TSG

Way to put Barry Alvarez on TV right as he yells at his grandkid. Lighten up, Grandpa!

LMAO, Barry Alvarez is telling his grandkid to gtfo of his face

Football is religion to lots of people, but when you’re Barry Alvarez and the Wisconsin Badgers are playing in a legendary Rose Bowl game, it’s a level never-before-seen — so get the hell out of the way, grandkids, because ol’ grandpa doesn’t have much time for your small talk.