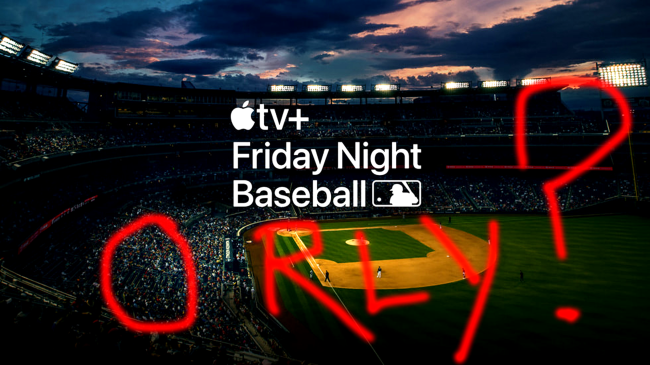 Apple officially announced on Tuesday that it had struck a deal with Major League Baseball to air a weekly Friday night doubleheader on Apple TV+ this season.

As part of the deal, the games will be exclusively broadcast on the streaming service, plus Apple+ also gets a new live show called MLB Big Inning.

MLB Big Inning, according to an Apple press release announcing the deal, will be “a live show featuring highlights and look-ins airing every weeknight during the regular season.”

Baseball fans in the US and Canada will also have access to a new 24/7 livestream with MLB game replays, news and analysis, highlights, classic games, and more, as well as a full complement of on-demand programming, including highlights and MLB-themed original content.

Fans will be able to watch marquee games on Friday nights, free from local broadcast restrictions, across devices where Apple TV+ can be found, including on the Apple TV app on iPhone, iPad, Mac, Apple TV 4K and HD, and on tv.apple.com, along with select smart TVs, gaming consoles, and cable set-top boxes. “Friday Night Baseball” will be available on Apple TV+ — and, for a limited time, without the need for a subscription.

Perhaps the most noticeable part of the release came in the first paragraph of Apple’s press release when they state that this new programming “will be available to fans in eight countries exclusively on Apple TV+ as soon as the regular season begins.”

“Just like all baseball fans, we can’t wait for the season to open,” said Peter Stern, Apple’s vice president of Services. “Baseball has a special place in the heart of so many Apple customers — not just in the United States, but in many countries around the world. We’re proud to make Apple TV+ the home for great baseball moments throughout the season.”

Yes. All baseball fans are waiting for the season to open. Which makes the timing of this Friday Night Baseball announcement all the more curious.

Especially on top of news that the owner of the Chicago Cubs is looking into buying an English Premier League club.

Baseball fans had suitable responses to this new MLB and Apple partnership.

Dear @Apple: Do you pay attention to the news? https://t.co/s78UQtliIR

This is the exact problem with baseball. MLB network isn’t on a streaming service like Hulu. So most people that are streaming don’t have it. Now you go to Apple TV for Friday night doubleheader. How many people actually have Apple TV? Why is manfred making it so hard to watch?

I’m sorry to be that guy in the room but - how is it ok that MLB is brokering deals with TV partners when they are in a lockout and cancelling games?,

It's incredible that, at every turn, MLB makes this game harder for the average fan to access.

Me figuring out how to watch baseball depending on the night of the week and my geographic location … you know… when MLB resumes in 2025 pic.twitter.com/8Socb8mCR5