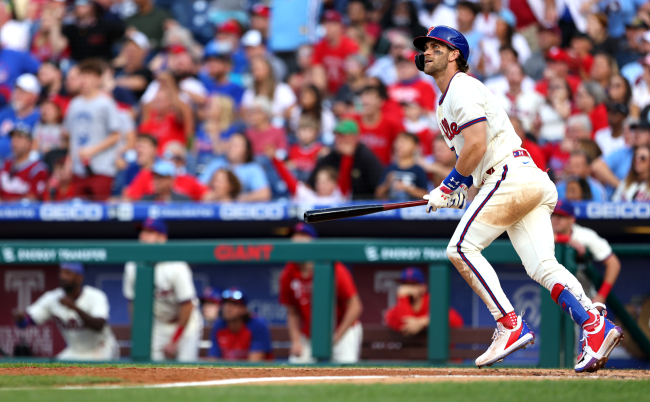 Just like everyone else who actually like baseball (i.e. not the owners or MLB commissioner Rob Manfred), Philadelphia Phillies star outfielder Bryce Harper is getting very irritated by the fact that he and others like him haven’t played in any games yet this year.

The Giants, sensing a golden opportunity, responded to Harper’s post.

This week, with very little movement in the negotiations to end the Major League Baseball lockout, Bryce Harper was back at it again.

It is becoming increasingly apparent that we may not have a Major League season in 2022. Both sides believe they have made significant concessions to the other-each side points at the other as having not done nearly enough. As has been reported, the word of the day is deadlock.

Only this time, Harper shared a photo of himself rocking a CTBC Brothers uniform of the Nippon League in Taiwan.

Harper, the 2021 National League MVP, isn’t the only big Major League Baseball star to flirt with teams outside the United States, looking for a place to play. Fernando Tatis Jr. was contacted by a team in the Mexican League, Toros De Tijuana.

Toros De Tijuana and other Mexican League teams have been going hard trying to lure MLB stars south of the border to actually play in some games this spring.

One can certainly dream.

Baseball fans, looking for a little ray of sunshine, have been having a lot of fun with these possible scenarios. (And they are possible, just very, very unlikely to happen.)

Get Kyle Schwarber down there, too, for a revenge home run derby.

I would love to see Bryce play overseas.