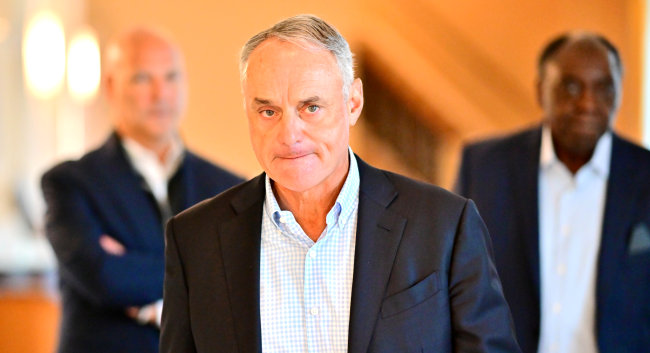 Following Monday’s failure to come to an agreement with the Major League Baseball Players Association, commissioner Rob Manfred and the league’s owners appear ready and willing to cancel a month’s worth of regular season games.

The league had already said that it will be canceling Opening Day games if the two sides didn’t resolve their difference by the end of Monday. That didn’t happen and now players and baseball fans alike are running out of patience.

“MLB did this,” Passan tweeted with a link to his story. “The owners’ arrogance. The mistreatment of players. As the league threatens to turn its lockout into a canceled Opening Day, the story of how something so very avoidable grew into Rob Manfred’s disastrous outcome.”

“Major League Baseball is in a crisis of its own making, a self-inflicted wound borne of equal parts hubris, short-sightedness and stubbornness from a class of owners who run the teams and seemingly have designs on running the game into the ground,” Passan began. “Barring a miracle eleventh-hour agreement Monday on a new labor deal that ends its lockout of the MLB Players Association, the league has said it will cancel Opening Day games. That baseball finds itself on the precipice of such an ugly denouement is no accident. It is a study in the consequences of bad behavior — of indignities big and small, of abiding by the letter of the law while ignoring its spirit and, worst of all, of alienating those who make the sport great.”

Why are Major League Baseball players fighting the owners so hard?

Passan also hits on some bullet points that explain why, even though MLB players make gobs of money, they are still fighting for more.

‣‣ “Players’ service time has been manipulated to keep them from free agency and salary arbitration.”

As Passan astutely points out, “Finance in sports is a zero-sum game.”

What doesn’t go to the players goes to the league and teams, and owners control how their teams spend money. Since the 1994 player strike that canceled the World Series — and especially over the last two collective bargaining agreements — the league has through canny negotiating positioned itself to be the aggressor, a role with which it has grown comfortable and familiar.

Players are used to their “threats”. Owners actions have made it clear all along that they have a set # of games where they still make profits/get TV money. They don’t want to play. It’s sad that these are the guys who drive the direction and “future”of our amazing sport.

The real highlight of Passan’s very lengthy and in depth piece, and the part that went viral due to its succinct accuracy, was when he wrote, “If you went and got the next 1,200 best players in the world, the product would suffer greatly. If you handed MLB teams over to any 30 competent businesspeople, the sport would not suffer. Actually, it might improve. It doesn’t take a billionaire to leverage a spot in a legalized monopoly with profound built-in revenues.

“The Yankees are not the Yankees if Babe Ruth, Lou Gehrig, Mickey Mantle and Yogi Berra don’t win. Without the best players, they aren’t in the World Series, and without championships, they’re little more than an organization in a big market whose laundry features pinstripes. One would think, then, that a league would recognize that its profits exist because of Shohei Ohtani, Fernando Tatis Jr., Mike Trout, Juan Soto, Mookie Betts, Ronald Acuña Jr., Vladimir Guerrero Jr. and others — and would see players’ concerns about the state of the game not as trivial or excessive or outrageous, but vital.”

When both Jeff Passan and Ken Rosenthal are digging into you with no remorse, then you know there's a serious problem. They are 2 of the best and kindest baseball guys in the entire business. https://t.co/22wOViKKGS

It's sad that, as fans, we seemingly care about baseball more than people who own the teams. We're all trying to grow the sport/bring in new fans...and we're doing it with 100lb weights tied to our legs, put there by the very people who stand to benefit the most financially. 😔

Man, Jeff Passan put this to words about as clearly as it can be done pic.twitter.com/qT8U1OYmTw

Amen to all of that. Now let’s play some f—ing ball!