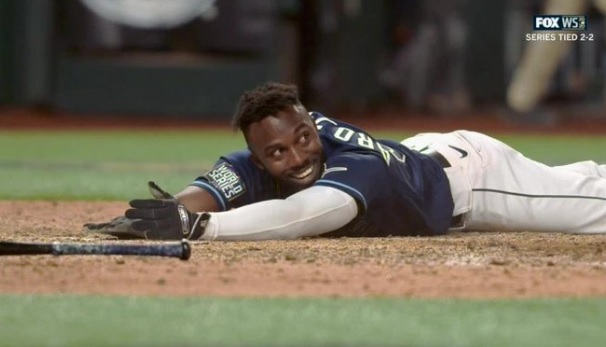 The LA Dodgers choked away game 4 in the wildest way possible.

With two outs and two players on base in the bottom of the ninth inning, Rays’ Brett Phillips delivered a hit that drove two runs for the win despite the fact that Randy Arozarena slipped and fell on his way to home plate.

Dodgers players were obviously shocked at what had transpired.

So many emotions after one of the wildest finishes in MLB postseason history. pic.twitter.com/AzW61axQRh

As were Rays players.

Tom Verducci: "What just happened?"@KKiermaier39: "I have no idea!" pic.twitter.com/XhTu4tybjN

Baseball fans were also stunned at the sequence of events that allowed the Rays to tie up the series.

😂😂@AROD's reaction to that wild Game 4 ending is priceless! pic.twitter.com/jnfiIOSbWy