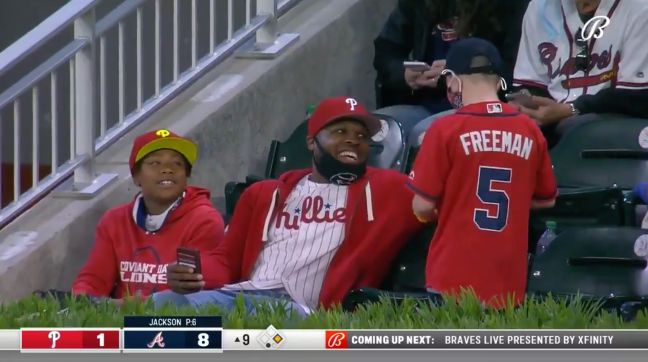 If you’re going to bring your glove to the ballpark, you have to catch anything that is hit your way. Whether it be a ball flipped your way from a player, a foul ball, or a home run, you have to pull it in. Well, this Phillies fan did not, and his father made sure to let him know that he blew it.

During Friday night’s game between Philadelphia and Atlanta, Braves first baseman Freddie Freeman drove one deep to right field for a two-run blast. The ball landed in first row, right into the glove of a visiting fan at Truist park, before it fell out over the wall into the bullpen. Someone in the pen tossed the ball back up, but the kid dropped it again, much to his father’s disbelief and disappointment.

The third effort to get the kid the ball was successful after it sailed over the glove into the seats and he quickly recovered it while his dad tried to hide from the shame. It was a hilarious father-son moment that quickly became a reminder of why baseball, and sports in general, are so great. After the Phillies fan finally got ahold of the Freeman dinger, he came across a Braves fan wearing Frito’s No. 5 jersey. After working so hard to come down with the ball, the son decided to share the souvenir with him. It made the younger Atlanta fan’s day and he went sprinting over to his dad to show him the home run ball.

The smile on the young Braves fan’s face is everything that is special about sports. When life is trying to keep us all down a little bit, the joy of a little kid getting his hands home run ball is pure joy. What a great moment for two fans of opposing teams and their fathers.