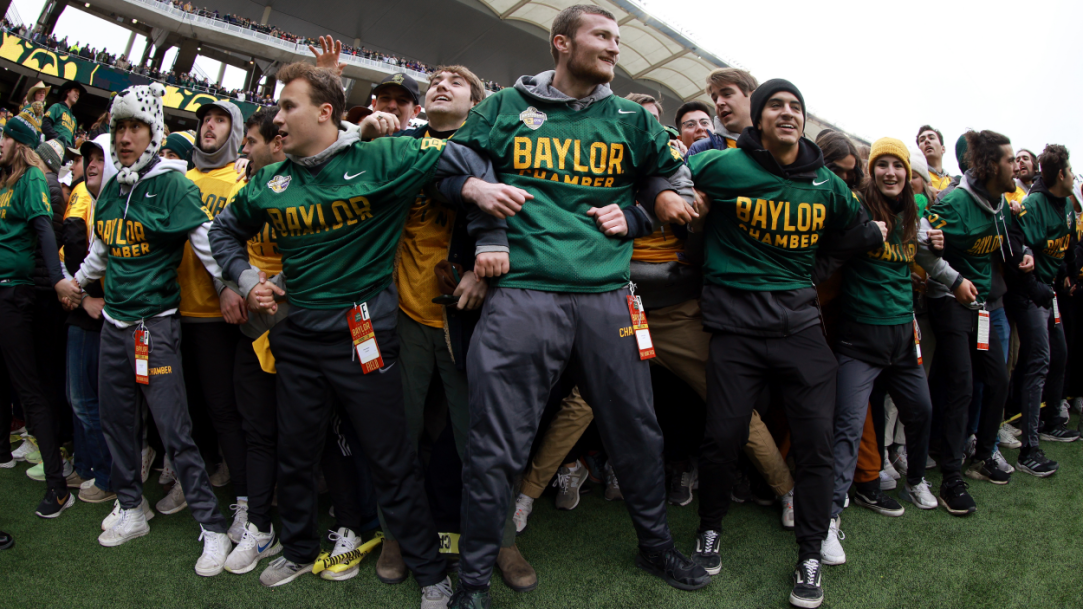 The Baylor Bears were *this close* to upsetting the #4 ranked TCU Horned Frogs on Saturday. Baylor scored 14 points in the 14th quarter and was leading TCU by 2 points until chaos erupted.

Throwing caution to the wind, Baylor opted to run the ball with just 21 seconds left on the clock instead of opting to throw the ball. This meant the clock didn’t stop and players had to sprint on and off the field to get set as TCU kicked a 40-yard field goal to remain undefeated.

A freshman at Baylor caught this moment on film with the most hilarious perspective imaginable. According to Grayson Weir, Bella Fuqua is a freshman at Baylor and dating freshmen walk-on QB Brayson McHenry who had a stellar HS career in Texarcana.

She pulled out her phone and started filming in anticipation of storming the field. The Baylor Bears faithful were ready to tear down the goalposts after upsetting the #4-ranked TCU Horned Frogs. Except that didn’t happen at all, and Bella Fuqua instead captured her reaction to TCU’s game-winning field goal:

The absolute devastation on her face is way more relatable than I’d like to admit. Going from the highest high to the lowest low is something most diehard sports fans have experienced at some point. And if they haven’t then they likely will someday.

The comments on her now-viral TikTok reflect a lot of shared experience when it comes to heartbreak in sports. Another girl commented “LITERALLY I WAS AT THE FRONT WAITING TO JUMP AND RUN” while someone said “you should’ve seen the band we were going feral” and another added “the fact i was in the stands ready to rush.”

One comment that really seems to have struck a nerve with people coming across this TikTok video of the Baylor-TCU ending is someone wrote ‘Roll Toad’. It’s remarkable how many College Football fans haven’t heard that phrase yet. And so many CFB fans aren’t ready to accept that it exists.

Others wrote “I don’t ever want to relive this moment” and “shed some tears on this one.” The heartbreak was real. This last-second loss to TCU will sting for Baylor Bears fans for a LONG time.