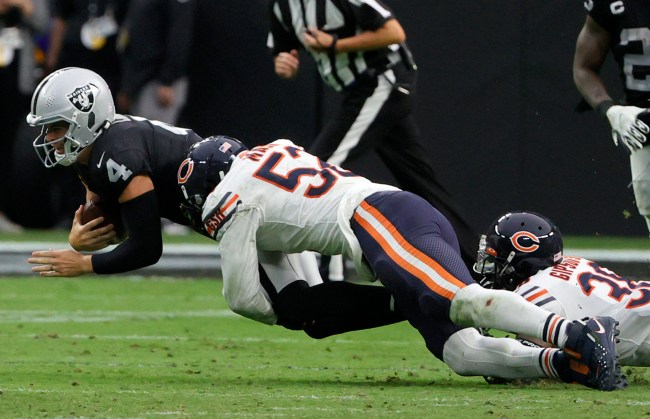 It has been a long, miserable season for Chicago Bears fans and things have only gotten worse for them this week. First, it was head coach Matt Nagy coming out and praising the awful call that cost the team their game against the Steelers in week 9. Now, they’ve lost one of their star players for the rest of the year.

It was announced today that Khalil Mack will be undergoing season-ending surgery on his foot. It’s a major blow to the defense that has been the only thing even resembling a bright spot for the Bears.

It should come as no surprise that Bears fans are having a tough time with this news.

Khalil Mack out for the rest of the season. Sounds about right @RedLineRadio pic.twitter.com/BlXIeGE46t

#bears fans, we started the week happy that Teven Jenkins was practicing.

Dealing with the Khalil Mack news and trying to grip to any amount of optimism for the rest of the season #Bears pic.twitter.com/PNdlu9Dhe9

The news even has some fans questioning if they really won the Khalil Mack trade.

The decision comes after Khalil Mack had missed the Bears’ last two games and had still not healed coming out of the bye. It is just another issue for a team with an offense that is going nowhere because their coaching staff refuses to properly use their promising rookie QB.

Now, the Bears will take on the Ravens without their star this week as they stare down a brutal schedule to finish out the year. It looks like the 3-6 Chicago Bears may be headed for their worst season yet under Matt Nagy.